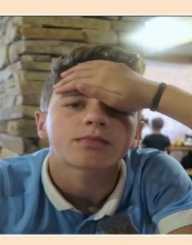 Flippin Brennan, best renowned for his role in”Flippin Katie.”Flippin Brennan was born on the 3rd of November 2002 in Colorado, USA. Flippin's earliest appearance came on his sister’s video titled “Family Obstacle Course Challenge” on her channel. This happened in May 2015.

He also has a little brother, known merely as Flippin’ Ryan. Not all the family has the word “flippin” in their name, as their parents’ names are Jill and Mike. From an early age, Flippin exhibited a deep passion for water polo. He has since participated in the Junior Olympics as well as the ODP National Tournament. Flippin has also been enrolled as a member of the National Junior Hockey Society.

In The Public Eye

There is scarce information regarding Flippin Brennan's personal life, apart from the family’s love of sports. His siblings participate enthusiastically in swimming and gymnastics. The Flippin family’s vacations have to be well-documented; in particular their trip to Disneyland. Their YouTube Channel has created an ever-increasing viewership that merely enjoys their antics. The response towards the family has been overwhelmingly positive. This is mainly due to their fun-loving personas. The videos they post have struck a chord internationally among other families, as their experiences are found to be intriguing. The close-knit relationship shared between all siblings seeps through into their videos. This is evident from the pranks they frequently pull on each other to the trivial fights they tussle over.

They naturally create undeniably cute and adorable instances, be it laughing at losses or bravely accepting the many pranks that are inescapable in the household. When observing the family of 5, you can feel joy well up inside you as you see them speculating what beasts may lie in a nearby lake or celebrating championship wins. The over the top yet hilarious challenges they engage in and downright absurd chatter they continuously immerse in evokes happiness. Flippin Brennan’s popularity is down to his uniqueness. In this digital age, he has managed to create a market that is willing to accept him.

The budding social media star was initially deployed as a cameraman for his sister’s videos. At the time he was merely called “Brennan.” However when he made his first on-screen appearance in the video “Family Obstacle course Challenge” people began to take notice. The video contains footage of the Flipping offspring enjoying a day at the park. Flippin Brennan's fame rose when videos of his hilarious and sometimes cruel pranks were published. They mainly revolve around what he does to his sister in particular. His many antics include falsifying the names of her dolls and wearing her clothes – typical older sibling behavior. Such behavior led to him naturally garnering an audience on various social media platforms.

Flippin Brennan's steady flow of appearances has generated a demand for him to be seen. This is most evident on his sister’s channel, where her fans are constantly demanding him to feature in future videos.

Her “Blogs” have shown a wide range of acclaim, generally ranging from ½ a million to 1 million views. They are met with positive reviews. The vlogs zeros-in on the daily lives of the Flippin Family and their close friends, the Bratayley’s. Katie; as shown in her vlogs. The entails include gymnastics and her two brothers mainly excel in swimming, water polo, and golf.

The most prominent achievement, commercially, of 2015 for the flippin family was their visits to their cousins. Their purpose was to participate in a 4th of July talent show that would be staged on American Independence Day. The talent show featured a wide variety of acts to the joy of the spectators. From the talent to the musical intermissions, there was no dull moment at the show.

Smartness, wittiness, and charisma paired with virtue and aptitude have helpedFlippin Brennan stand out from the crowd. It has almost single handily propelled Brennan to dizzying heights he finds himself at today. The unique, but undeniably impressive skillset – an athlete, golfer, swimmer and a vlogger – would never go unnoticed in a person of such youth. Flippin Brennan's pleasing personality, charm, and pleasant demeanor have led to numerous discussions about him develop on the internet.

The siblings all breathe and ooze life, happiness, aptitude, and virtue. This is done individually and collectively. They strike a balance between intelligence, brilliance, and fun. They do not overburn themselves with any one trait. They from all indications, despite all, enjoy infuriating each other with pranks, banter, and challenges that leave the others fuming. This permeates from every video they upload.

His Skills And Charm

The internet in a way has allowed people to soar to stardom, but for others, it is only a stepping stone- a milestone on a longer path. This appears to be true for Flippin Brenan. Social media might not define who he is. Flippin isn’t just another one hit wonder who stumbled upon popularity; he has earned it. Since the age of 9, he has been actively participating in high-level sports, and he has received critical acclaim ever since.

Flippin's most significant competitive sports participation came in the form of the Junior Olympics and International competitions in Canada, where he represented his nation valiantly. Flippin lives and abides by the life motto, ‘Live Happy,’ a lesson we could all take inspiration from him.