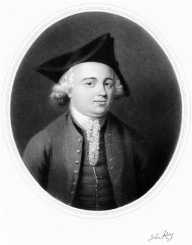 Edmund Cartwright was an inventor in his time. However, before he invented the power loom, he was a clergyman.

Edmund Cartwright was born on April 24, 1743, in Nottinghamshire, East Midlands, England. He was one of four sons of a wealthy landowner. His brother John went into the English Navy and later became a political reformer.

His brother George went into the English Army before he later became a trader and explorer in Labrador.

As a boy, Edmund Cartwright attended Queen Elizabeth Grammar School in Wakefield. He graduated from University College at Oxford before attending Oxford's Magdalen College. From there he graduated in 1766 with a Master of Arts degree.

Cartwright's primary career in life was that of a rector. After he graduated from the university, he was a clergyman for the Leicestershire church. Edmund Cartwright moved up in the church and was appointed as the prebendary or senior clergyman of Lincoln Cathedral in 1786. He remained in that position for the rest of his life.

When Edmund Cartwright was in his 40s, he visited the cotton-spinning mills in Cromford, Derbyshire. His visit to Sir Richard Arkwright's property inspired an interest in engineering, particularly industrial engineering. Edmund Cartwright set off to make his invention that would improve the quality of the weaving as well as the speed. While some thought it was a foolish idea, he followed through with this idea. His greatest problem was that he was unfamiliar with the mechanisms and working knowledge of such machines. Edmund Cartwright designed his first power loom in 1784 and got the patent a year later. He enlisted the help of both a carpenter and a blacksmith. It was not as successful as he hoped.

Edmund Cartwright started his weaving and spinning factory in Doncaster, Yorkshire. This too was not a huge success; it was more of a laboratory to test out his new inventions. He continued making modifications on the power loom. The model that he patented in 1789 with Zach Dijkhoff became the one that modeled the power looms of the future. The benefits of his machines were that he could reduce the manufacturing costs of creating textiles, but these endeavors did not make Cartwright a wealthy man. Still, he continued to invent other machines, some more useful than others.

There was the wool-combing machine, the Cordelier, and even a steam engine that used alcohol instead of water. Because of his inexperience and struggles in his inventions, Cartwright had to close down his weaving factory and declare bankruptcy. Also, some handloom weavers were worried about their job security with machines doing their work. Edmund Cartwright also enjoyed writing, especially poetry. He was able to publish some of his works and became a regular contributor to the “Monthly Review.” One of his most notable poems is titled “Armida and Elvira.”

Edmund Cartwright married Elizabeth McMac. The couple had one daughter, Elizabeth. She followed her father's footsteps in writing under the pen name Mrs. Markham. Cartwright died on October 30, 1823, in Hastings, Sussex at the age of 81.

Edmund Cartwright was able to see a need for greater productivity in the textile industry. While it was not his area of expertise, he was able to lay the foundation for the invention of his power loom.

Factory owners in the 19th century were able to use his inventions and modify them. In the end, they made looms that worked more efficiently for the needs of their business. Edmund Cartwright appealed to the House of Commons and was compensated for his invention in 1809. The sum was £10,000.

Edmund Cartwright was elected as a Fellow of the Royal Society in 1821. He received patents for his inventions, but only gained compensation after they were modified by later inventors.