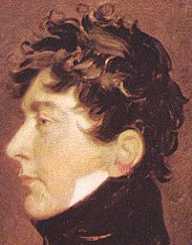 His father, George III, was the ruling monarch of England. George was born in St. James's Palace, the eldest child of the King.

His titles at birth included Duke of Cornwall and Duke of Rothesay. Within a short space of time, he also became the Prince of Wales and the Earl of Chester.

When he turned 18, George IV received his place to live. He made the most of his new-found freedom, becoming a womanizer and a heavy drinker. George IV decorated his home with great extravagance, much to the dismay of his conservative father.

George IV lived extravagantly with the money he was given. This caused tensions to rise between George IV and his father.

When he was 21, George IV met Maria Fitzherbert. She was a commoner and a Roman Catholic. As the Prince was heir apparent, he required the King's permission to marry. He married Fitzherbert in a quiet ceremony at her home, without getting his father's approval.

Because the King's permission wasn't given, the marriage was technically void. Fitzherbert, however, believed she was the true wife of the Prince.

George IV continued with his lavish lifestyle. He moved in with Fitzherbert when his father refused to help him with his debt. Parliament granted him 161,000 pounds or just over 20 million pounds in today's value. He also received 60,000 pounds to renovate his home, Carlton House.

Crisis for the Monarchy

In 1788, the King's mental capacity declined. When Parliament reconvened in November, the King was unable to deliver his speech.

Parliament debated whether the King could be left in a position of ruling the country. The Regency Bill passed, which allowed the government to reconvene if the King was incapacitated.

The King recovered soon after, and he agreed for the Bill to remain in place.

George IV's debt was spiraling out of control. The only way the King would help was if George married Princess Caroline of Brunswick. He agreed with his father to the marriage, which took place on 8th April 1795.

The couple had a daughter, Princess Charlotte, in 1796. After Charlette's birth, George and Caroline separated. George IV remained with Fitzherbert for the remainder of his life.

George IV had several prominent mistresses throughout the years, as well as several illegitimate children.

Parliament once again provided a grant to George IV, as well as a yearly amount. By 1806, he had cleared all the debts he incurred before 1795.

The King took ill again in 1810. Parliament signed off the letters patent, naming the Lords Commissioners. George IV became known as the Prince Regent and had his powers restricted.

George IV left the running of Parliament mainly to the government. Unlike his father, he took a hands-off approach. Spencer Perceval led the Tories, whom the King supported.

In May 1812, Perceval died by assassination. George IV replaced Perceval with Robert Jenkinson.

George IV and his wife Caroline had lived apart since 1796. Caroline moved to Europe, but she returned for George IV's coronation, asserting herself as the queen consort. George IV, however, refused to make her his queen.

The authorities deleted Caroline's name from the Book of Common Prayer, and the liturgy.

The King's advisors wanted George to remain married so that his affairs would not be made public. The King refused to have Caroline at his coronation. She fell ill that same day, 19th July 1821.

George IV toured to Ireland and Scotland after his coronation, proving to be very popular.

George IV rarely appeared in public. This was due to him being extremely obese from his lavish lifestyle.

By the end of 1828, George was almost blind from cataracts. He also had debilitating gout. George took high dosages of an opiate called laudanum which regularly left him in a drug-induced state.

King George IV died on 26th June 1930. An autopsy revealed a blood vessel in his stomach had ruptured. He also had a tumor in his bladder, and an enlarged heart surrounded by a fat deposit.