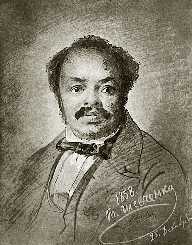 The Shakespearean actor was born as Ira Frederick Aldridge on the 24 July 1807 to Reverend Daniel and Lurona Aldridge in New York City. His parents were free blacks at the time slavery was still in place.

His family was keen for Ira Aldridge to follow his father into the ministry and he studied at the African Free School in New York City. It was while studying that he came into contact with drama and acting. Later in the UK, he studied drama at the University of Glasgow in Scotland.

As a young man, Ira Aldridge began to mix with professional African-American actors in New York City, and they advised him to join the African Grove Theatre. The all-black theatre troupe was founded by James Hewlett and William Henry Brown in 1821.

He worked as an actor for a few years then in 1824, mainly because of the racism he experienced as an African-American in the theatre, he emigrated to Europe. He was given the opportunity to travel with a famous British-American actor James William Wallack who employed him as a valet.

After Ira Aldridge moved to England in 1825, he made his stage debut as Othello at Covent Garden in London and received good reviews, although they were divided.

Ira Aldridge was somewhat rejected by the British establishment and never appeared at Convent Garden again. Instead, Aldridge was embraced by working-class and radical audiences.

He frequently appeared on stage at the Surrey Theatre in Lambeth, where posters celebrated his talent. As he toured around England, he was soon established as a Shakespearean actor, playing various roles including King Lear, Macbeth, Shylock, Iago, and Macbeth.

The role of Othello was his most famous. In the late 1820s. He spent time in Coventry where he acted as well as managed the theatre, and today there is a plaque in memory of his time there.  In the 1850s and 1860s, he toured Europe performing in Prussia, Germany, Australia, Switzerland, Hungary, and Poland.

Ira Aldridge received many awards and acknowledgments including the Maltese Cross from Switzerland, the Golden Cross of Leopold from Russian and the Prussian Gold Medal for Arts and Sciences.

The Royal Shakespeare Theatre at Stratford-up-Avon in England has a memorial plaque honoring his work. The Manchester Art Gallery in England holds a painting, A Moor by James Northcote (1826) which depicts Aldridge in the role of Othello. In 1858, he became the first actor to be knighted when he was made Chevalier Ira Aldridge, Knight of Saxony.

Ira Aldridge was married twice. He died on the 7 August 1867 while on tour in Poland. He was sixty years of age.