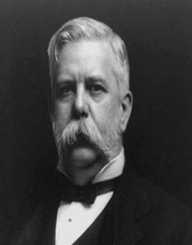 At the outbreak of the Americal Civil War, George Westinghouse enlisted in the New York National Guard. He was only 15 years old at the time, and his parents did not approve of his enlistment. He returned home but eventually got their permission and joined the 16th New York Calvary’s Company M where he rose to the rank of corporal. He resigned from the Army in late 1864 and enlisted in the Navy where he served as an assistant engineer on the gunboat USS Muscoota. He was discharged from the military in August 1865 and assisted his father in the manufacture of agricultural equipment.

George Westinghouse enrolled at Union College but left shortly after beginning his studies.

George Westinghouse invented the Rotary Steam Engine when he was 19. Two years later, he created a device that guided derailed railroad cars back into position. He also designed what was known as a reversible frog,  a switch which allowed a train to switch tracks. Westinghouse developed a railroad braking system using compressed air after seeing two trains collide (1869). He obtained a patent for the invention in 1873 and formed The Westinghouse Air Brake Company. The invention was so successful that before long, railways around the world were using the system.

Westinghouse also founded the Union Switch and Signal Company which manufactured his railway signal devices. These companies also began operating in Canada and Europe. He was also intensely interested in electricity and obtained the rights to Nikola Telsa’s system of Alternating Current (AC), (1888), forming the Westinghouse Electric Company. The company was granted a contract for the construction of 3 generations located at Niagara Falls, to harness electricity and he also was awarded the contract to supply electricity for the Columbian Exposition in Chicago in 1893.

In 1905. Westinghouse showcased the first AC locomotive which went on to be used on the New York Subway system, and he also manufactured the Parsons steam turbine in the United States.

George Westinghouse's wife was Marguerite Erskine, and the couple had one child, a son, George. Westinghouse lost a lot of money in the financial crisis of 1907. By 1911, he was no longer involved with his former companies and instead devoted himself to public service. His health deteriorated during this time and died at the age of 67 in 1914.