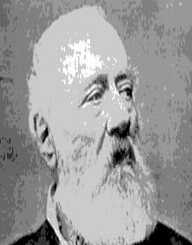 Antonio Meucci was an Italian inventor and a renowned scientist of the 18th century. He was an associate and friend of Giuseppe Garibaldi an Italian Nationalist. He is credited with many inventions like the Hygrometer.

Antonio Meucci developed the voice communication apparatus and is believed to have first invented the telephone and not Graham Bell.

Antonio Meucci was born on Apr 13th, 1808 in Florence, Italy. He was the eldest of 9 children. His parents were Domenica Pepi and Amatis Meucci. Antonio was a student of mechanical and chemical engineering in

The Florence Academy of Fine Arts. He had to drop out after two years owing to financial constraints. His interest in education and science, however, did not reduce. He took odd jobs and continued his education through correspondence courses.

Antonio Meucci worked as a stage technician with the opera house “Teatro delta Pergola.” In 1834 he designed an apparatus based on the concept of speaking tube.Through this, he was able to establish communication from the control room of the theatre with the people on stage.

On Aug 7th, 1837 he married Esterre Mochi, a costume designer who worked in the theatre. His association with Francesco Domenico Guerazzi caused him to be imprisoned. On his release in 1845, he migrated to Cuba with his wife and worked in a theatre till 1846. He also created a water purification system.

Antonio Meucci then took up a job at Franz Anton Mesmer’s therapy systems on rheumatic patients.  Using electric shocks to treat illness he found that sound could travel by electric impulse through copper wire. Antonio Meucci used this technology later in 1850 in his voice communication apparatus. Antonio Meucci was inspired by Samuel F.B. Morse in the US and decided to move to the US to make a living through his inventions.

Career In The US

Antonio Meucci settled with his wife in the Clifton Borough of Staten Island. He built a Tallow Candle factory with his savings and employed Italian exiles. In 1854 his wife became an invalid because of rheumatoid arthritis. In 1856 he set up a telephone to communicate with his wife. His notes describe the basic principles of electromagnetic transmission of sound and voice of the telephone.

Between 1856 and 1870 he built about 30 varieties based on this model. Antonio Meucci could not develop more because his candle factory became bankrupt. On 12th December 1871, Antonio Meucci set up an agreement with Sereno G.P. Breguglia Tremeschin, Angelo Antonio Tremeschin and Angelo Zilla Gandi to constitute the Telettrofono Company.

Antonio Meucci submitted a caveat through his lawyer titled “Sound Telegraph” in the US patent office on 28th Dec 1871. He was however not granted a patent owing to technical shortcomings in the explanations. Trial procedures were dropped due to his death in 1889. In 1876 Bell created a patent for his telephone invention.

He made equipment to hear the inarticulate voice of a person. He named this devise “telegraph parlante” or talking telephone. His patents include candle mold, lamp burner, hygrometer, methods of testing milk and improved process to make paper pulp to name a few. The International Telecommunication Union stated that Meucci’s work was 1 of the four precursors of Bell’s telephone.

Smithsonian Institute listed Meucci’s as one of the eight most important inventions of the telephone in 1976 exhibit. In 2002 US House of Representatives passed a resolution entitled United States HRes 269 on Antonio Meucci. Here it was mentioned that his life and achievements be recognized and his work in the invention of the telephone be recognized.

In 2003 the painter ‘Nestore Corradi’ painted the ideas of Meucci and the Italian Post & Telegraph Society imprinted this image on a stamp issued by them.

Antonio Meucci married in 1837 to Esterre Mochi, a dress designer. She was severely ill most of their married life, and their union ended when she breathed her last in 1884, five years before Antonio Meucci s death.