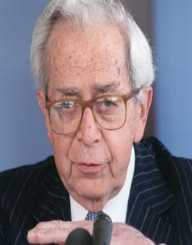 Lloyd Cutler was an American lawyer who held a number of significant positions in the U. S. government.

Lloyd Norton Cutler was born on November 10, 1917, in New York City. His father was a prominent trial lawyer. He graduated from high school early. He enrolled at Yale University, where he studied history and economics. He received his bachelor’s degree at the age of 18. He continued at Yale Law School and he graduated in 1939. He was the editor of the Yale Law Journal and he was a member of the Elihu secret society.

After graduating, Cutler spent a year working as a clerk for the judge Charles Edward Clark. He then started working for the law firm of Cravath, Swaine & Moore in New York City. During World War II, he took part in the Lend-Lease program for defense. He also served as an intelligence analyst for the U. S. Army. In 1962, he became one of the cofounders of the law firm Wilmer, Cutler & Pickering. The firm was based in Washington D. C. and it specialized in public policy and international law. Its clients were major companies such as ABC, CBS, and NBC.

Cutler became one of the co-chairs of the Lawyers’ Committee for Civil Rights Under Law. He also served in the Trilateral Commission. In 1979, he became the White House Counsel for President Jimmy Carter. He mostly specialized in international issues. They included the SALT II negotiations, the Iranian hostage crisis, and the Soviet invasion of Afghanistan. In 1988, he was appointed as the head of a commission that increased the salaries of senior government officials. This earned him a lot of political allies. In 1994, he became the White House Counsel for the second time, now working for President Bill Clinton. At the same time, he continued counseling clients in his firm, as well as private clients. He appeared on national TV to defend the President during the Lewinsky scandal. In 2004, he became a member of the Iraq Intelligence Commission.

In 1941, Cutler married Louise Howe. They had three daughters, named Deborah, Beverly, and Louisiana, and a son named Lloyd Jr. His wife passed away in 1988. A year later, he married a widow named Polly Kraft.

Lloyd N. Cutler broke his hip and suffered from complications after the injury. He died in his home in Washington D. C. on May 8, 2005. He was 87 years old.