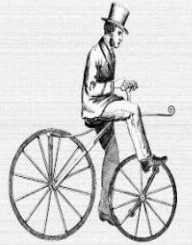 Kirkpatrick Macmillan was born on September 2, 1812, in Thornhill, Scotland. His father was Robert Macmillan.

As a child, Kirkpatrick Macmillan was a clever boy, and he wasn’t afraid to get his hands dirty. His father was a blacksmith, and he often spent hours in his shop, learning the trade. He also learned about various other machinery. Although he never went to college, he learned many valuable skills from watching his father work.

In 1834, Kirkpatrick Macmillan left home to work as an assistant blacksmith to Walter Scott. He worked here for only a short amount of time before returning home to continue working as an assistant to his other. Although he was an assistant, he did do some of his own work. He did various ordinary blacksmithing tasks, but he also had a mind of an inventor.

I am said that one day, Kirkpatrick Macmillan saw someone riding a hobbyhorse, which was more or less like a bicycle that did not have wheels. To drive it, a person would need to run their feet along the ground. Macmillan wanted one, but he didn’t want to buy one. Instead, he decided to build his own.

While working on his hobbyhorse, he decided it would be better if there was a way to propel it forward without repeatedly putting his feet on the ground. It was around this time that he got the idea for the bicycle pedal. He began working on this new idea in the late 1830’s. By 1839, Kirkpatrick Macmillan had created a basic model of a bicycle. It was made of wood, which is not used often anymore, but the pedals were much like modern-day ones.

One of the main problems with Macmillan's bicycle was that it was incredibly heavy when compared to today’s average bicycle. It was difficult for an average person to ride on a flat road, and nearly impossible to drive uphill at all. Even though it was difficult to ride, it was still much faster than walking, at least for Macmillan. He did not work on changing the bicycle to make it lighter. He also never patented his invention.

While biking one day, another inventor, Gavin Dalzell, saw Macmillan's bicycle and tried to copy it, making slight modifications. He later sold the invention as his own. For decades, Dalzell was thought to be the original inventor of the bicycle because of this.

Another inventor, Thomas McCall, also saw Kirkpatrick Macmillan biking. He also tried to copy and modify his invention. He was the one who invented the brakes for a bicycle. However, unlike Dalzell, he did not try to sell the invention as his own.

Oddly enough, Macmillan was not bothered by others taking, improving upon his invention, or even patenting it for their own. Macmillan only wanted people to be happy with what he had made. He didn’t care much for not making money off of his invention. Instead, he took the most joy in simply riding his own bicycle around the country and enjoying the rest of his free time in his country home.

Kirkpatrick Macmillan married Elizabeth Goldie in 1845. Together, the couple had two children.

Kirkpatrick Macmillan died on January 23, 1878, in Courthill, Scotland. He was 65 years old when he passed away.