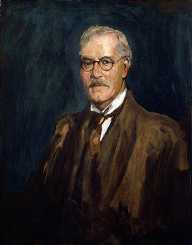 James Ramsay MacDonald was born on October 12, 1866, in Lossiemouth, Scotland. His father was a plowman and a Highlander from the Black Isle of Ross, and his mother was a housemaid. However, MacDonald was an illegitimate child.

Ramsay MacDonald attended the Free Kirk Elementary School in his hometown and then went to study at the Drainie Parish School. After finishing school, he began working as a pupil-teacher, but later moved to Bristol and began working as a clergyman’s assistant. In Bristol, he joined the Social Democratic Federation- a Marxist oriented society.

After working in Bristol, Ramsay MacDonald moved to London and began working in a clerical job. While in London, he joined the Independent Labor Party in 1894 and the following year ran as the party’s candidate for a seat in the Parliament. In 1896, Ramsay MacDonald began writing for Labor and Socialist journals and over the next several years began rising in his career and gained recognition in the society.

When the Labor Representation Committee was formed in 1900, Ramsay MacDonald was unanimously voted as its first secretary. The Committee was later transformed into the Labor Party, which MacDonald became a Chairmen of in 1911. His career suffered a setback when MacDonald opposed that Britain enters the World War I. The press so heavily criticized him that he ended up resigning from his post. However, in 1922, he returned to the Parliament and became the Chairman of the Parliamentary Labor Party and the leader of the opposition.

In 1924, Ramsay MacDonald became Britain’s first-ever Labor governments Prime Minister, when King George V asked him to form the government. However, his government lasted less than a year, when the party suffered a defeat in the 1924 elections. During the Baldwin government, the Labor Party began to raise up in popularity, since the government was not able to tackle growing unemployment. In the 1929 elections, Labor Party formed a coalition with several Liberals and ran against the Conservative Party. This action resulted in a win for Laborites and MacDonald ice again was in power.

During his second term as the Prime Minister, the economic situation in Europe and the world was worsening. This caused Britain major problems and disagreements on how to resolve the situation created a division in the cabinet. MacDonald was forced to resign in 1931. However, MacDonald was supported by other party leaders and was persuaded to include opposition members in his government.

Ramsay MacDonald formed a cross-party government and was able to hold his position. Although he remained in his position, the coalition government lost the support of many Labor party members. MacDonald was dubbed a traitor by several members of the parliament. Despite the negativity towards him, MacDonald and his government was able to stabilize the financial situation. MacDonald resigned from the post of Prime Minister in 1935, due to increasing health problems. He then became the Lord President of the Council and held the position until 1937.

Ramsay MacDonald married Margaret Ethel Gladstone in 1896. She was a feminist and a social reformer. The couple had six children together. In 1911, Margaret died from blood poisoning. This was major devastation for MacDonald, and he never married again.

Ramsay MacDonald was suffering from several health issues and in 1936 decided to embark on a sea voyage to restore his health. The trip turned out to be his last, and Ramsay MacDonald died aboard the liner Reina del Pacifico on November 9, 1937.