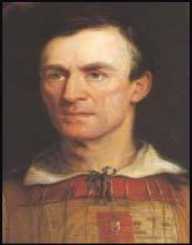 George Catlin was an American painter and writer who mostly depicted Native Americans.

George Catlin was born on July 26, 1796, in the city of Wilkes-Barre, Luzerne County, Pennsylvania. His father, Putnam Catlin, was a lawyer and Revolutionary War veteran. His mother was Mary Polly Catlin. She told him stories about Native Americans, sparking his interest at a young age. He had seven brothers, named Charles, Henry, James, Julius, John, Richard, and Francis. He had six sisters, named Clara, Juliet, Eliza, Mary, Sally, and Lynde.

George Catlin initially started working as a lawyer. He soon decided to give that up, selling his law books to buy art supplies. He created engravings and portrait miniatures. He became a member of the Pennsylvania Academy of Fine Arts. In 1825, his lithograph of Buffalo was published in Cadwallader D. Colden’s book Celebration of the Completion of the New York Canals.

In 1830, Catlin embarked on a journey to Native American territory along the Missouri River. Over the next six years, he made several trips to that area. He also went to Arkansas, Florida, the Red River, and the Mississippi River.

He visited dozens of tribes, such as the Pawnee, Mandan, Hidatsa, Omaha, Crow, Cheyenne, and many others. He made over 500 portrait paintings of the members and chiefs of the tribes. He became the first Caucasian man to paint Indians in their territories.

In 1837, George Catlin went back to New York to open the Indian Gallery. He displayed his paintings and gave lectures about Native Americans. He soon took the Indian Gallery to cities such as Pittsburgh and Cincinnati. He started his efforts to sell his collection to the U. S. government, but Congress rejected him.

In 1839, George Catlin moved to Europe. He displayed the Indian Gallery in London, Paris, and Brussels. He showed it to King Philippe Louis of France and Queen Victoria of England. In 1841, he published the book Manners, Customs, and Condition of the North American Indians. He wrote about his experiences and featured many engravings. In 1844, he released a similar book, titled Catlin’s North American Indian Portfolio. In 1848, he published Eight Years’ Travels and Residence in Europe.

Because of his debt, Catlin had to sell the Indian Gallery. In 1852, industrialist Joseph Harrison purchased all of the paintings. Catlin spent the rest of his life trying to recreate his old works. He called his new set of paintings the Cartoon Collection. From 1852 to 1857, he visited Native American tribes in South and Central America. He wrote about it in his book Last Rambles amongst the Indians of the Rocky Mountains and the Andes. After returning from South America, he once again visited the tribes along the Missouri River. In 1872, he briefly worked in a studio at the Smithsonian Institution.

In 1828, George Catlin married a woman named Clara Bartlett Gregory. They had a son named George Jr and three daughters, named Clara, Elizabeth, and Louise. He also had children with a Native American woman in the West.

George Catlin passed away on December 23, 1872, in his home in New Jersey. He was 76 years old. His body was buried at the Greenwood Cemetery in Kings County.

George Catlin's paintings are on display at the Smithsonian American Art Museum, the New York City American Museum of Natural History, the Pennsylvania Museum of Anthropology, and the San Marino Huntington Library. Catlin was a character in Larry McMurtry’s novel The Berrybender Narratives, James Alexander Thom’s novel The Children of the First Man, and Louise Erdrich’s novel Shadow Tag. In 2001, he was inducted into the National Rivers Hall of Fame.