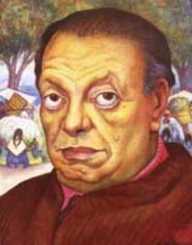 Diego Rivera was a Mexican artist who is best known for his frescoes which were key to the start of the Mexican mural movement.

Rivera was born on 8 December 1886 in Guanajuato, Mexico. Rivera had a twin brother, Carlos, who died age two. His family was comfortable financially and his parents, Maríadel Pilar Barrientos and Diego Rivera Acosta, were encouraging of the young Rivera. He began drawing at age three. His family moved to Mexico City when Rivera was six. He studied at Carpantier Catholic College and the Academy of San Carlos. Rivera studied Classical European art and went to Spain to study more in 1907.

Rivera moved to Paris in 1909 and set to work amongst the artists of Montparnasse. While in Paris Rivera discovered Cubism and was inspired by the works of Picasso. He quickly embraced this new art form, Cezanne’s work also had a great influence on Rivera during his time in Europe. Rivera moved to Italy in 1920 to study Renaissance art. He returned to Mexico in 1921. He was employed by the Mexican government to partake in their mural program. His first major work in the program was Creation. Rivera painted it in the National Preparatory School and felt threatened by the number of right-wing students there.

Rivera was a member of the Communist Party and was a founding member of Revolutionary Union of Technical Workers, Painters, and Sculptors. Rivera’s work reflected his leftist beliefs as his frescoes focussed on society and the 1910 Revolution. The Aztec and Mayan cultures also influenced Rivera, and their effect is seen in his use of storytelling in his murals. In the Arsenal is a famous fresco by Rivera which best reflects all the major elements of his work. Rivera painted a controversial piece Fertile Land, in 1927. The painting depicts the Mexican peasantry and the hammer and sickle, it was controversial as it adorned a chapel in the University of Agriculture.

Rivera was invited to Moscow in 1927 to celebrate the tenth anniversary of the Bolshevik revolution. However, Rivera was expelled from both the USSR and the Mexican Communist Party in 1928 for anti-Soviet actions. In 1930, Rivera went to San Francisco and was commissioned to do some murals for the stock exchange and institute of art there. Rivera traveled across America and was exhibited at the Museum of Modern Art in New York and created the famous Detroit Industry fresco for the Detroit Institute of Arts. Rivera painted a mural depicting Lenin at the Rockefeller Center, this saw Rivera fired and the mural destroyed.

Rivera returned to Mexico as he found work harder to come by following the incident. Rivera again courted controversy with an image in his Dreams of a Sunday in the Alameda, depicted Mexican political figure Ignacio Ramirez holding a sign which read ‘God doesn’t exist.’ The painting would not be displayed until the sign was painted over.

Rivera married his first wife, Angelina Beloff, in 1909. Rivera was not at all faithful to his wife, and their marriage was dissolved in 1922. They had one child together, Diego. Rivera fathered a daughter, Marika, during an extramarital affair with painter Marie BronislavaVorobieff-Stebelska. Rivera married his second wife, Guadalupe Marín, in 1922 and together they had two daughters, Ruth and Guadalupe. Rivera divorced Marín in 1929. Rivera’s next wife was the painter, Frieda Kahlo, neither was faithful, and they divorced in 1939. However, they remarried in 1940 and stayed married until Kahlo’s death in 1954. Rivera married Emma Hurtado, his agent, in 1955 and the marriage lasted until his death. Rivera was diagnosed with cancer a short time into the marriage. He died of heart failure on 24 November 1957.

As a communist Rivera was an avowed atheist and had a deep-seated dislike of religion. He did, however, join an occultist movement. He joined the Ancient Mystical Order RosaeCricus in 1926. The order was founded in America and focussed on the worship of ancient gods from Egyptian traditions. Rivera founded a Mexican branch of the order named after the Aztec god Quetzalcoatl. Rivera’s involvement with the order was part of the reason for his expulsion from the Communist Party.