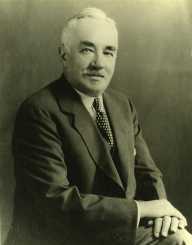 Milton Snavely Hershey was born on September 13, 1857, in Pennsylvania’s Mennonite community. His family settled in Pennsylvania in the early 1700s. During his childhood, he spoke Pennsylvania Dutch and worked on the family farm. His father used to leave his family and children for long periods of time.

Hershey was educated in the local school until 4th grade and later received a limited education. In 1871, he left school indefinitely and began working for the local German-English newspaper.

Milton Hershey did not enjoy his work at the local printer, and one day, after accidentally dropping his hat in the printer he was fired from his job. His father persuaded his boss to give him a second chance, but Hershey’s aunt and mother wanted him to learn the candy making trade. His mother arranged an apprenticeship for Hershey with a confectioner Joseph Royer in Lancaster.

Milton Hershey spent the next four years learning the craft and in 1876 moved to Philadelphia to start his own business. He later traveled to Denver and found work with local confectioners at the same time learning more ways to create candy. He also moved to New Orleans and Chicago, and finally settled in New York City in 1883. He started his second business in 1883, but it lasted only until 1886.

In 1883, Milton Hershey returned to Lancaster and got a loan from the bank to start the Lancaster Caramel Company. The company quickly became a success. The key to his success was a unique caramel recipe he obtained during his years of traveling and learning, and his knowledge that candies sold better in bulk. Further success came when a man from England tried out Hershey’s candies and placed a big order to Britain.

Milton Hershey was then able to repay his debt to the bank and expand his business. By 1890, the Lancaster Caramel Company had majorly expanded and employed more than 1,300 workers. Hershey then traveled to Chicago to the World’s Columbian Exposition, where he learned about chocolate candy which sparked his interest in the craft. Hershey decided to take a significant risk and sold the Lancaster Caramel Company for $ 1 million.

After selling the Lancaster Caramel Company, Hershey used the money to acquire land outside of Lancaster. There he was able to obtain abundant supplies of fresh milk, needed to produce chocolate. At the time, milk chocolate was a luxury product, and Hershey was determined to create a formula that sells the product to the American public. His initial trials were not successful, but in 1900 he produced the first Hershey’s chocolate bar.

In 1907, Milton Hershey developed the Hershey’s Kisses, which was followed by the Hershey’s Bar with almonds. In 1903, Hershey began constructing the largest chocolate manufacturing company in the world. The facility was finished in 1905 and had the newest technology in mass production. Hershey’s chocolate became the first product of its kind to be mass produced. Soon after, the land around the plant grew with houses, businesses, churches, and an extensive transportation infrastructure, surrounded by dairy farms.

Milton Hershey married Catherine Sweeney in 1898. They met in a candy store in New York. The couple lived a happy life together. However, they did not have any children. Hershey’s decided to help other children and families and established the Hershey Industrial School with a Deed of Trust. In 1912, the couple had booked tickets on the ill-fated luxury liner RMS Titanic. However, they had to cancel their reservation since Hershey had to attend to some business matters. His wife died in 1915, and Hershey never remarried.

In 1918, Hershey created the Milton Hershey School Trust fund, which also held most of his assets and control of the company. In 1935, he established the M.S. Hershey Foundation to provide education and cultural opportunities to Hershey residents. In 1963, the Penn State Milton S. Hershey Medical Center was built.

During World War II, Hershey Chocolate company supplied the United States armed forces with chocolate, called the Ration D Bars and Tropical Chocolate Bars. The chocolate bars had stringent requirements for exact weight and ability not to melt in temperatures higher than 90 degrees. The chocolate also had to have an unpleasant flavor to prevent chocolate cravings.

The Tropical Chocolate bar tasted better and was designed not to melt in tropical weather. In 1939, the company produced more than 100 000 ration bars a day, and by the end of World War II, the company was producing more than 24 million bars a week. After the war, Hershey Chocolate Company was issued the Army-Navy E Production Award for exceeding expectations for quality and quantity of production.

In 1944, Milton Hershey retired from the Board of the company. He died the following year, on October 13 after falling ill with pneumonia.