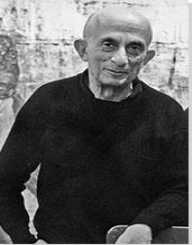 Leon Golub was an American painter and political activist.

Leon Albert Golub was born on January 23, 1922, in the city of Chicago, Illinois. His parents were Jewish immigrants from Lithuania and Ukraine.

During World War II, Leon Golub joined the U. S. Army as a cartographer of reconnaissance maps. In 1946, he created Charnel House, a lithograph inspired by the Holocaust. In 1948, he took part in the Momentum Exhibition and the Veteran’s Exhibition at the Art Institute of Chicago. He became involved with artists such as Robert Barnes, Fred Berger, Dominick Di Meo, June Leaf, Irving Petlin, and others. They became known as the Monster Roster, and later as the Chicago Imagists. They were known for their gruesome work filled with fantasy and mythology.

In 1954, he made a series of paintings titled Burnt Man. Around 1956, he began making paintings based on newspaper photographs. In 1959, some of his paintings were featured in the New Images of Man exhibition at the Museum of Modern Art.

In 1959, Leon Golub moved to Europe, hoping that the people there would be more receptive to his controversial work. He was inspired by Ancient Roman, Ancient Greek, and Etruscan art. He started making paintings based on classical sculptures and pottery. In 1964, he moved to New York City. He joined the Artists and Writers Protest, a group that was against the Vietnam War.

He created several anti-war series of paintings, including Vietnam, Combat, and Napalm. He organized The Collage of Indignation, one of the group’s collaborative projects. In the early 1970s, he struggled with his art. He destroyed many of his old works and almost entirely gave up painting.

In the late 1970s, Leon Golub painted over a hundred portraits of political and religious leaders. They included Fidel Castro, Nelson Rockefeller, Richard Nixon, Francisco Franco, and many others. After that, he started producing paintings with themes such as violence, oppression, aggression, and racism. He made the series Horsing Around, Interrogation, Riot, and Mercenaries. In the 1990s, he began adding graffiti, carvings, and old manuscripts to his work. He also dealt with themes such as death and loss. In 1996, he made stained glass windows for the Temple Sholom in Chicago.

Leon Golub's paintings are part of many public collections in the United States, Canada, Australia, Italy, and Israel. They are also part of the private collections of T. C. Williams, Gene R. Summers, Ulrich Meyer, and Harriet Horwitz. In 2015, the Serpentine Gallery in London and the Hauser & Wirth gallery in New York held a retrospective of his career.