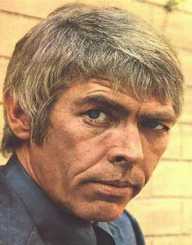 James Coburn was born in Laurel, Nebraska on 31 August 1928. His father was James Harrison Coburn Jr, and his mother was Mylet Johnson. Coburn's maternal ancestry was Swedish, and his father came from Scots-Irish stock. The family suffered financially through the Great Depression when Coburn was still a young child. By the time Coburn was of school age, they were living in Compton California.

James Coburn went to Compton Junior College in California. He was then drafted into the US Army, spending time in Texas and Germany. Later he studied acting at Los Angeles City College and Jeff Corey’s Professional Actors Workshop.

Major movies included The Magnificent Seven (1960) a big hit which won him international fame. The Great Escape (1963) which followed soon afterward was another resounding success. The Flint films were also important milestones in his career. Both The Magnificent Seven and The Great Escape were directed by John Sturges. These two films are also notable for the fact that Coburn, Steve McQueen, and Charles Bronson appeared in both of them. Affiliation (1997) won James Coburn his Academy Award in 1998. He played an abusive father in the screen adaptation of the Russell Banks novel of the same title.

Won an Academy Award for Actor in a Supporting Role for his performance as an abusive father in Affliction (1997). The presenter was Kim Basinger.

James Coburn married Beverly Kelly in 1959. They were married for twenty years before divorcing in 1979. They had one child together; a son also named James Coburn. In 1993, he married Paula Murad, and they stayed married until his death in 2002.

His stage debut was in Billy Budd at the La Jolla Playhouse. While looking for acting work, he appeared in commercials, including one for a Remington razor and another for beer. Coburn's tall frame and rugged good looks made him a natural for westerns. His first few roles were small parts in a number of them. One notable western he starred in was Ride Lonesome (1959). Then he won the part of Bitt in The Magnificent Seven (1960). This film was a huge hit.

Coburn was then offered a role in The Great Escape, a film set in World War II. He played a prisoner of war. After these two big hits, Coburn was considered a bankable actor. Hs next film Major Dundee (1965) was directed by Sam Peckinpah. Our Man Flint (1966) was followed by The President’s Analyst (1967). Then he starred in In Like Flint (1967), the sequel to Our Man Flint. During the 1970s Coburn starred in Pat Garrett & Billy the Kid (1973) which also starred Kris Kristofferson and Bob Dylan. Hard Times (1975) found him acting alongside Charles Bronson again.

His next role was in another Sam Peckinpah film, Cross of Iron (1977) where he played a German soldier. Coburn was always a sought after actor and continued working in film and television. All up he made eighty films. He won an Academy Award for Best Supporting Actor for Affliction (1997). He acted in The Man From Elysian Fields (2001). His final film The American Gun (2002) was released posthumously.

James Coburn had rheumatoid arthritis from the late 1970s onwards. The arthritis got so bad that at one stage, his right hand was almost crippled. He turned to alternative therapies and found that through a combination of diet, exercise, and supplements, the arthritis eased.

He continued working until later in life. His final film, The American Gun (2002) was released after he died from a heart attack in 2002, age 74.

James Coburn was a keen martial arts exponent. He had been good friends with Bruce Lee before the actor’s untimely death. He was musical and wrote lyrics. Two of his songs appeared on Lynsey de Paul’s album Tigers and Fireflies. Coburn appears on the album cover Paul McCartney & Wings Band on the Run album.

His interests included yoga and meditation.

From a young age when his father had owned a garage during the Depression years in Nebraska, Coburn was interested in cars. He owned a number of Ferraris, exported rare cars overseas and also restored cars.