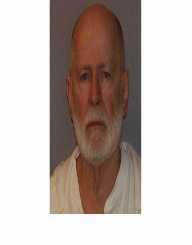 Whitey Bulger was born in Dorchester, Massachusetts. The Bulger family is of Irish-American ancestry and Whitey Bulger was one of six children. His father lost an arm in an industrial accident and this reduced the family to poverty. Bulger grew-up in public housing in South Boston, known colloquially as Southies. His parents were James Joseph Bulger, Sr. and Jane nee McCarthy Bolger. Bulger’s brother William (Billy) Bulger was a successful US politician, lawyer and educator. Both Bulger’s brothers excelled at school.

As a young child, Whitey Bulger was identified as unruly. He ran away to join the circus when he was ten. By fourteen, he was a shoplifter. During his younger years he was continuously arrested for assault, theft and later armed robbery. He served five years in a juvenile prison and then joined the Air Force. During his time in the US Air Force, he was arrested for going AWOL before being discharged in 1952.

In 1956, Whitey Bulger was sentenced to twenty-five years in Atlanta Penitentiary for armed robbery and truck hijacking. He served nine years, then returned to Boston. Around this time he became involved with Donald Killeen. After Killeen was shot in 1972, Bulger joined the Winter Hill Gang. He found a home in the gang and quickly rose to prominence.

A shrewd, clever operator Bulger was also extremely ruthless and had no qualms about organizing hits. By the end of the 1970s, he was an established crime figure in the Boston’s underworld. When the leader of the Winter Hill Gang was sent to prison, Bulger took over as the boss. For sixteen years he was involved in murder, drug dealing, bookmaking, extortion and shady financial loans.

At the same time, he was also an FBI informant. This informer role lasted from 1975 through to 1990, particularly in relation to the Patriarca crime family. The Patriarca family was a rival gang and it suited Bulger to inform on them.

A major investigation into Whitey Bulger’s gambling empire was instigated in 1994. By early 1995, Bulger was indicated. He had been tipped off and fled with Theresa Stanley, his de facto wife. Stanley did not want to be parted from her children and so the couple returned. Bulger left again, this time with Catherine Greig, his mistress. By 1999 Bulger was on the FBI’s Ten Most Wanted Fugitives list and a massive reward was put on his head.

For sixteen years, Whitey Bulger vanished from the police radar. Then, in the summer of 2011, acting on a tip-off, Bulger was arrested living in a modest apartment in Santa Monica, California. Police confiscated more than three quarters of a million dollars in cash, guns, ammunition and knives. Catherine Greig was still living with him.

When the trial started in June 2013, Whitey Bulger was accused of involvement in nineteen murders, drug dealing, corruption, money laundering and extortion. He was also accused of corrupting law enforcement officers. Another charge was running a criminal enterprise from 1972 through to 2000.

After a two month trial by jury in 2013, Bulger was found guilty on all accounts, apart from seven murders and another murder the jury could not decide on.

On the 13 November 2013, Whitey Bulger was sentenced to two life sentences plus five years in Prison. He appealed this verdict in the US Supreme Court. The appeal was rejected in 2016.