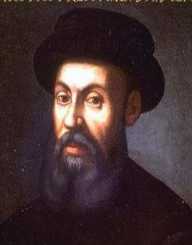 Ferdinand Magellan was a Spanish explorer of Portuguese origin who technically became the first sailor to sail around the globe.

Magellan was taken to stay with the Portuguese Queen Leonora as a page boy. Page boys were children of nobility who worked in the royal household.

While in Lisbon he went to the School of Pages. Magellan was adept with scientific studies. He proved himself in the branches of astronomy and celestial navigation. He also did well in cartography and map reading.

In 1505, Ferdinand Magellan got his first chance to sail in the high seas. He was part of the crew that was to navigate to the Indian subcontinent through Africa. During the voyage, Magellan had to withstand battles and other perils along the way. Their fleet was attacked twice.

The first battle was in 1506 which was later known as the Battle of Cannanore. Then in 1509, he fought the Egyptian forces in the Battle of Diu. From India, the Portuguese fleet sailed to Malacca in Malaysia.

They pacified the natives and conquered the city-state. Finally, they reached the Moluccas in Indonesia. The islands were famous in their production of the world’s most priced spices. Magellan arrived back in Portugal in 1513. The journey took him seven years before he returned to Portugal.

In the late months of 1513, he was on another mission to North Africa. The region of Morocco had rebelled by refusing to pay taxes imposed by Portugal. With a fleet of 500 ships and a 15,000 strong army, the Portuguese easily pacified the rebellion.

In 1514, Ferdinand Magellan was dismissed from the royal service. He was accused and convicted of illegally trading with the Moroccan merchants with the spoils of war.

Determined to continue sailing, Ferdinand Magellan sought permission from the Portuguese king. His pleas for commissioning were thwarted by King Manuel of Portugal. Magellan traveled Spain in the hope of realizing his sailing dream.

The idea of finding an alternative route to the Spice Islands of Moluccas was accepted by the Spanish king. The traditional Afro-Indian route was dominated by the Portuguese who loathed any competition.

In 1518, together with another Portuguese born sailor, Magellan set sail in command of a fleet of five ships. The control of a Spanish fleet by two Portuguese captains infuriated the Spanish public.

Portugal and Spain were traditional rivals for ages. Faleiro, the other Portuguese captain was replaced by a Spanish national. Finally, in 1519, the fleet left Spain for the ambitious journey of discovery.

The fleet sailed to Brazil and headed towards the southern tip of the continent. When they docked at Puerto San Julian, a mutiny occurred. The Spanish captains of the four other ships rebelled against the leadership of Magellan.

Ferdinand Magellan executed the mutiny leader and left another to fate on dry land. In November 1520, Magellan entered the Pacific Ocean with three of his five ships. The fourth had been destroyed by storms, and the fifth deserted back to Spain.

Death In The Philippines

After painfully navigating through the Pacific Ocean, Ferdinand Magellan reached Guam in March 1521. In April of the same year, he entered the Philippines. He stayed on Cebu Island and befriended the natives. He managed to convert their tribal chief to Christianity.

While waiting for shipping supplies for his crew, the natives went to war with the neighboring island of Mactan. Magellan joined in the fight to help his host island. He died from a poisoned spearhead on April 27, 1521, on the Mactan Island.

The fact that he once sailed from the Moluccas to Spain and went westwards via the Pacific to the Moluccas make him the earliest man to circumnavigate the globe. The rest of the crew sailed to the Moluccas and took the spice treasure back to Spain.

Like other nationals who set sail under a foreign flag, Ferdinand Magellan never got a befitting recognition in Spain. To them, he was still a Portuguese national, a traditional enemy.

He proved that the world is round and not flat as earlier believed. The navigation of the globe with basic, sometimes crude scientific navigational equipment was a monumental achievement. He named the new sea the Pacific Ocean.

To honor Ferdinand Magellan, the passage at Cape Virgenes was renamed Strait of Magellan. Geographical features and even a species of penguins in South America have been named after him.