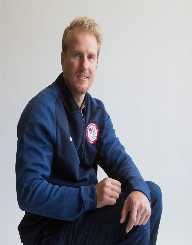 Ted Ligety was born on August 31, 1984, in Salt Lake City, Utah, USA. His parents are Cyndi Sharp and Bill Ligety.

Ted Ligety was only two years old when he first learned how to ski. From that point on, his parents encouraged him to hone his skills. When he was in middle school, he attended the Winter Sports School.

After high school, Ligety’s parents paid for him to spend a year practicing and competing with the US Developmental Team. His parents saw this as an investment. Luckily for Ligety and his parents, the investment paid off.

In 2004, Ted Ligety entered the Junior World Championships. While there, he won a silver medal.

In 2005, he earned a spot on the US Ski Team. This was also the first year that he participated in the US Championship at Mammoth Mountain, California. He won the title in the Combined and the Slalom events.

Ligety’s first time at the Winter Olympics was in 2006, in Turin, Italy.  While there, he participated in the Men’s Giant Slalom, Men’s Slalom, and the Men’s Combined for the US Alpine Skiing team. He earned the Gold medal in the Men’s Combined event but did not do as well in the other events. He also won titles at the US Championships at Sugarloaf, Minnesota, in the Combined and Slalom.

In 2007, he competed in the US Championship in Alyeska, Alaska. He earned titles in the Combined and Giant Slalom.

Ted Ligety later returned to the Winter Olympics in 2010, in Vancouver, Canada. This time, he participated in all the events he had in the last Olympics, as well as the Men’s Super G. He again played for the US Alpine Skiing Team. This time, he did not win any medals, but he did rank in the top ten for both the Men’s Giant Slalom and the Men’s Combined events. With his Gold medal winning, Ligety became the youngest American man to win this type of medal for Alpine Skiing.

Ligety’s most recent time participating in the Winter Olympics for the US Alpine Skiing team was in 2014, in Sochi, Russia. This year, he continued to play in the four events he had participated in during the last Olympics. He earned the Gold medal in the Men’s Giant Slalom and was in the top 15 in the Men’s Combined and Men’s Super G events.

In 2015, he again competed in the World Championships, where he won a gold medal in the Giant Slalom.

Ted Ligety is currently planning on participating in the 2018 Winter Olympics in Pyeongchang, Republic of Korea. The Olympics will take place from February 9 to February 25.

Outside of his skiing career, Ted Ligety also owns a skiing apparel company called SHRED Optics. While SHRED Optics does not have a store for just their goods, their products are also sold all around the world by Elan Sports Inc., White Balance, Sports & Ski, Alchemist, Anomaly Action Sports Inc., and various other retail outlets and distributors.

Ted Ligety is married to Mia Ligety. Together, this couple has on son: Jax.