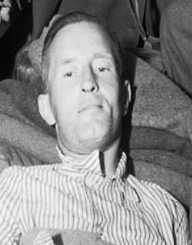 William Joyce, who became famous for broadcasting propaganda in English from Nazi Germany during World War II was born on the 24 April 1906 in New York City. His father Michael Joyce was an Irish Catholic immigrant from County Mayo, and his mother was Gertrude Brooke, the daughter of an English doctor. His father had become a naturalised American in 1894 and William was a first generation American. In 1909, the family returned to Ireland, where his father opened a pub in Galway. The family moved to England in December 1921.

At age 15, William Joyce lied about his age and joined the Worcestershire Regiment in England. After it was discovered that he was below the minimum recruitment age of 16, he was discharged. He then applied to become an officer at Officer Training Corp via London University. He passed the entrance exam and studied first at Battersea Polytechnic and later at Birbeck College. During this time he was the President of the Conservative Society on campus.

He also got involved with a right-wing society, the British Fascisti, an anti-Communist group. The group sometimes volunteered as stewards at Conservative events, and it was one such occasion that Joyce received a razor cut to his face which gave him a distinctive scar. Without completing his MA, Joyce left university and got a job as a tutor at the Victoria Tutorial College. He was still a member of the Conservative Party but was unhappy about his failure to find a position within the Foreign Office.

Eventually, William Joyce left the Conservative Party (1930), and in 1932, Oswald Mosley formed the British Union of Fascists which became known as the Blackshirts. Joyce joined and found a talent for public speaking.

After a British Union of Fascists rally turned violent in 1934, their leader Moseley fired his Director of Propaganda and replaced him with William Joyce During this time the BUF anti-semiticism was becoming more apparent, and attacks were reported in Jewish areas of London. In 1937, he stood for Parliament as BUF candidate and managed to get more votes than anticipated but not enough to be elected. After the party’s disappointing showing during the general election, Mosley cut back the leadership, and Joyce lost his position as Director of Propaganda.

Joyce then formed the National Socialist League with two other ex-BUF leaders and called for on a formal pact with Hitler. When Joyce became aware that he was in danger of being arrested, he fled the country. Claiming that he was a British citizen, he obtained a British passport in August 1939. The passport enabled him to travel to Germany to offer his services to the Nazi propaganda effort.

By September 1939, William Joyce began broadcasting German propaganda in English from Berlin and in 1940, he was granted German citizenship. Because of the tone of his propaganda broadcasts, he became known as Lord Haw-Haw. He subsequently became one of the most hated men in Britain.

William Joyce was captured by the British Army near the Danish border in May 1945 and was put on trial for treason at the Old Bailey. The prosecution argued that because Joyce had been in possession of a British passport, he owned his allegiance to Great Britain. A judge agreed, and Joyce was found guilty of treason. On the 3 January 1946, he was hung at Wandsworth Prison. He was 39 years of age.

William Joyce's first wife was Hazel Barr whom he married in 1927. The couple had two daughters. Then in 1937, Joyce divorced Barr and married Margaret White, a fellow member of the BUF. They divorced in 1941. During the 1970s, his daughter Heather campaigned to have his body returned to Ireland for reinterment, and this took place in Galway in 1979.