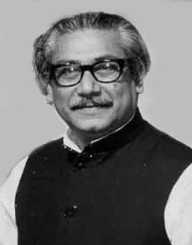 Sheikh Mujibur Rahman was born on the 17 March 1920 in Tungipara village in the district of Faridpur. He was one of six children.

Sheikh Mujibur Rahman matriculated at Gopalganj Missionary School in 1942 and then studied at the Calcutta Islamia College, graduating with a BA in 1947. During his time at Islamia College, he was the general secretary of the College Students Union (1946).

As a young man Sheikh Mujibur Rahman was an activist with the Bengal Provincial Muslim League and from 1943 he was also a member of the All India Muslim League Council. In 1946 he was elected deputy of the Muslim League for the Faridpur District. In 1947, after partition, he enrolled at the University of Dhaka to study law. In 1948 he was one of the organizers of the East Pakistan Muslim Students League. In 1949 was expelled from university for political reasons and never obtained his law degree.

Along with Suhrawardy, Maulana Bhashani and Yar Mohammad Khan, Sheikh Mujibur Rahman was instrumental in forming the Awami Muslim League. In 1949, he was elected joint secretary of its East Bengal, and in 1953 he became the general secretary. He was also elected to the East Bengal Legislative Assembly as part of the United Front coalition. He served as agriculture minister and between 1955 and 1958 he was a member of the Constituent Assembly of Pakistan. Moves were made to merge the western provinces into West Pakistan during the creation of the Islamic Republic of Pakistan. East Bengal was renamed East Pakistan. Rahman pushed for the renaming and official recognition of the Bengalese language.

The following year, Sheikh Mujibur Rahman returned to Bangladesh and was installed as prime minister. One of his first initiatives was a programme implementing the nationalization of key industries. In 1974, there were devastating floods in Bangladesh which ruined the grain crops, and over 28,000 people died. The political unrest started to increase, and a national state of emergency was declared.

In 1975, Sheikh Mujibur Rahman became the president of Bangladesh. Politically matters were getting worse, and in August, he was assassinated in a military coup, and martial law was imposed.

Sheikh Fazilatunnesa Mujib (1938-1975) was the wife of Sheikh Mujibur Rahman, and the couple had five children together, three sons and two daughters. On the 15 August 1975, when a group of junior officers assassinated her husband, she died along with him together with her three sons, other family members, and their staff. Their two daughters who were visiting Europe at the time the assassination took place.