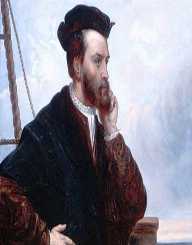 There is little to no evidence about how Jacques Cartier assimilated his skill of navigation. But his motherland was a significant trade of ports during the 16th century. The fact remains that Cartier was just like any other explorer who looks for two major things: walk-away to Asia and gold. And like other navigators, he went home exhausted without success. Through his extensive exploration, he discovered different parts of Northern America area. In short, he was the first European to sail the America inshore. His research skills impressed King Francis I, especially when he brought the Gulf of St. Lawrence into the limelight. Not to mention the discovery of Prince Edwards Island played a significant role in his explorative talent.

On December 31, 1491, Jacques Cartier was born in Brittany, Saint-Malo which became a section of France. His childhood life is quite unclear. But his navigation career is said to begin in 1524 where he followed an Italian-French native, Giovanni Verrazano. His first experience turned him into a valuable explorative innovator. In the mid of 1534, Jacques was authorized by King Francis I to manhunt the Indies passage to South East Asia. He obliged to the rules given by sailing to different parts. He arrived in Quebec where he later moved to Gaspe Bay and declared it as part of France. He returned believing he found Asia.

In 1535 Cartier sailed the St. Lawrence River up to the Iroquoian capital. He arrived in Montreal where he was prevented from moving further due to rapids. According to him, he believed that he couldn't explore with the fast occurrence of turbulence. In 1536 he managed to endure a merciless winter where he went back to France with the help of an Iroquoian chief. Before then he had found about the Kingdom of Saguenay which he defined it as a legendary city that was said to be full of gold and wealth.

Early in 1540 Cartier opted to explore the New World of Captain General. He took off with five navigation ships with the aim of finding the real Kingdom of Saguenay. He tried to build a settlement between Quebec and present-day Cap-rouge. However, their efforts didn’t bear any fruits but King France I men believed that they discovered gold and diamonds. In 1542 Cartier left the promising land due to starvation and external attacks. Eventually, the land was separated in 1543. Even though his last plan didn’t work out, Carter's findings of the St. Lawrence River unlocked the part of Canada where French settlers came to explore and settle.

In 1520 Jacques Cartier married Mary Catherine des Granches. Unfortunately, his life was cut short during an epidemic. He died on September 1, 1557, at 65 years old.