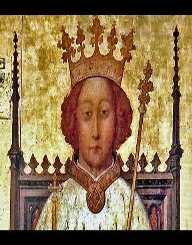 Richard II of England was once the king of England. He came to power in 1377 after the death of his grandfather Edward III who was king.  He was only ten years old when he ascended into the throne. His father was the heir to the kingdom but passed away before he became king. Richard suppressed the Peasants’ Revolt in his teen’s years as king and was greatly applauded by his people. He married twice in his life. He adored his first wife Anne most. His rule ended after Henry of Bolingbroke his cousin deposed him.

Richard II of England was born on January 6th, 1367. His place of birth was in Bordeaux. He was the son of the Black Prince Edward and his wife Joan of Kent. His grandfather was Edward III. He was the king of England at the time of Richard’s birth.

Richard II had an elder brother known as Edward. Sadly he died in 1371. Death once again claimed his father in 1376 after he fell ill.  He was immediately made the princedom of Wales. This was to avoid John of Gaunt his uncle from taking the kingdom.

In July 1377, a young Richard II was crowned as King of England. This was following the death of his grandfather King Edward III in June 1377. Richard II was only ten years old at the time. His uncle, John of Gaunt, was still a threat to the young king. Luckily, a group of councilors was put in place to assist Richard to run the kingdom. Two of them particularly had great influence over the kingdom. They were Robert de Vere and Sir Simon de Burley.

Unfortunately for the young king, he came into power during wartime. England and France were in the middle of battle.  The citizens of England were subjected to heavy taxing as a source of attaining war funds. This angered the citizens a great deal.

Among the challenges, he faced as king was the Peasants’ Revolt. This was in 1381. Several Officials that held top ranks in his government lost their lives during this time. The 14 years Richard II decided to control the situation for it was getting out of hand. He negotiated with the leader of the rebellion. However, the rebels kept on with their killings and looting. He later suppressed the revolt making the citizens proud of him.

Richard II later eased the heavy taxation that had been instilled on the citizens in 1396. By then he had gained full leadership control over his kingdom. The small groups that earlier helped him rule became a past to him. However, he became an autocratic and tyrannical ruler. These changes discontented the citizens. He dragged his own grave when he disinherited Henry of Bolingbroke. He was the son of his uncle John of Gaunt. This infuriated Henry a great deal. He then led an invasion to overthrow Richard. He succeeded after Richard gave in without a fight. Henry then became Henry IV and took over the throne. Richard was then imprisoned.

In 1382, Richard II tied the knot with his first wife Anne of Bohemia. Her parents were King of Bohemia Charles IV and Elisabeth of Pomerania. The couple lived happily together till 1394 when Anne passed away. The loss of his beloved wife quite saddened Richard II. They never had children. His second marriage was in 1396 to Princess Isabella. Her father was Charles VI of France. She was only six years old when the marriage took place. Their marriage was a political alliance.

Richard II of England took his last breath still a young man on February 14th, 1400. He was only 33 years old at the time of his death. The cause of his death is still a mystery.