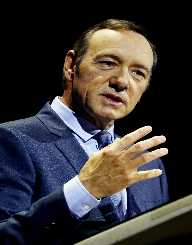 Kevin Spacey Fowler was born on July 26th, 1959. He is an Academy Award actor popularly known for his movies such as American Beauty, Superman Returns and more recently in the TV series House of Cards. He landed into his career stardom during the 90s with the release of hit films such as The Usual Suspects -1995 and two years later Se7en. Aside from his acting career, Spacey is highly acclaimed for his production, directing and writing skills.

Kevin Spacey was born in 1959 in South Orange, New Jersey. His parents, Thomas Geoffrey Fowler and Kathleen Ann had three children with Spacey as the youngest. His father was a data consultant specialist whereas his mother worked as a secretary. Spacey’s sister is named Julie, and his elder brother is called Randy. When Spacey was aged 4, the family migrated to southern California. His parents sent him to the military school, Northridge Military Academy, before being expelled for his troublemaking behaviors. He was moved to Chatsworth High School, a drama school located in Chatsworth. Spacey was a changed student here as he later graduated a valedictorian from his class.

With motivations from Val Kilmer who was his former classmate, Spacey decided to join Julliard School in 1979. However, he did not spend much time here as he left two years later. Soon, he joined the New York Shakespeare Festival where he featured in some stage performances. During this period, he had also began appearing on the TV. After this, he entered the film industry featuring in films such as Working Girl-1988, See No Evil, Hear No Evil-1989 and Glengarry Glen Ross-1992.

Spacey’s career turning point came during the mid-90s. In 1995, The Usual Suspects was released with Spacey playing the role of Gabriel Byrne. This movie was a hit and that it earned him an Academy Award under the category for best-supporting actor. The same year, Se7en and Outbreak were released. The success of these films contributed to some follow-up movies that were released later on including A Time to Kill-1996, Midnight in the Garden of Good and Evil-1997, and American Beauty-1999. Spacey was awarded an Academy Award for his lead role in the American Beauty. The same year, in 1999, he was bestowed with a star recognition in Hollywood Walk of Fame.

With Spacey being a star during this period, he took advantage of this and played a part in entertaining his fan base by releasing movies such as The Shipping News-2001, The Life of David Gale-2003, Beyond the Sea-2004, Superman Returns-2006.

After disappearing from the TV scenes, Spacey reemerged in 2013 by playing the lead role in House of Cards. This was a political drama. His role as Frank Underwood earned him two major award nominations, i.e., Emmy and the Golden Globe awards. Two years later after the release of the TV series, Spacey won the Golden Globe award for his outstanding role in the political drama series.

Kevin Spacey has lacked a visible partner in the dating game. He often prefers to live his private life away from the public’s attention. It is for this reason that the media will frequently speculate his private affairs without having facts.