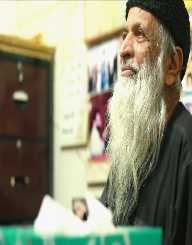 Abdul Sattar Edhi was a Pakistani humanitarian, philanthropist and ascetic. He is commonly known for starting the Edhi Foundation, which controls and operates several orphanages, hospitals rehab centers and homeless shelters in Pakistan. Edhi was often relentless in his service to the sick, ostracized, destitute and the abandoned. As a result, he was referred to as `Angel of mercy’ and became one of the most respected figures in his country.

Abdul Sattar Edhi initially began his charitable work singlehandedly but was soon joined by others who shared his spirit. In addition to his charity works, he often advocated for religious tolerance and right to work for women.

Abdul Sattar Edhi was born on 28th February 1928 in Bantva, Gujarat in Brutish India, and his family was a Memon one. When he was young, his mother often gave him two Paisas, one for his meal and was instructed to give the other to the beggars. When he was around 11, his mother developed a stroke that led to paralysis. As a result, Edhi set aside a significant amount of his time to caring for his mother on a regular basis. As he cared for her, he developed sensitivity and great empathy for sick people, challenged people and those that were mentally ill. When he was 19 years of age, his mother succumbed to the stroke and died.

In 1947, India was partitioned, and due to this, Edhi and his family relocated to Pakistan. At the time, there was a lot of widespread violence that led to the death of millions of people. He managed to get out of the region safely and began a new life in Karachi Pakistan.

When Abdul Sattar Edhi was 20 years of age, he joined a charity group operated by Memons, who was an Islamic religious community whereby his family was members. He managed this despite being completely broke and facing many other personal troubles. However, the charity only helped individuals that belonged to the Memon community. Due to this, he became much disappointed by the group, since he felt the need to help everyone.

Abdul was then employed at a wholesale shop in Karachi. He later started working as a peddler and then a commission agent, dealing with cloths at the Karachi Market.

At this time, he began helping the sick and needy people. He had saved money after working for a few years which used to start a free dispensary to provide medical attention to the community. He provided care to the sick and worked until late night hours.

In 1951, Edhi took a step further in his humanitarian work by starting the Edhi Foundation in Karachi. At first, its primary objective was the provision of emergency medical attention on a 24-hour basis to needy people and provision of maternal facilities to homeless women.

In 1957, there was an epidemic of the Asian flu. As a result, there was an urgent need to improve the provision of services due to the more substantial number of Patients at the time. The number of doctors was not enough, and the funds were also limited. Edhi then took to the streets where he begged for donations and looked-for volunteer medical students to work in the hospital.

Eventually, a wealthy businessman came to his aid. He released a huge donation, and Edhi was able to buy an ambulance for the facility. In the following years, his work attracted the attention of many who in turn contributed a lot of money regarding donations. With the funds, Edhi continued setting up other orphanages, rehab centers, women shelter and hospitals in various cities in the country. More so, he also provided the Edhi foundation helped people with missing person cases, especially women and children. Even, the organization could cover burial costs for people who lost their lives in disasters, and their bodies could not be identified.

- He was the recipient of many international awards, i.e., Lenin peace prize in 1988 and peace prize from the former USSR in 1998.

Abdul  Sattar Edhi got married in 1965 to a lady named Bilquis. She worked as a nurse at the Edhi dispensary and had similar views regarding the humanitarian work. She worked with him through and also operates a free maternity home. The couple has four children together. Edhi led a private life and avoided publicity despite the fame he later gained.

Abdul Sattar Edhi died on 8th July 2016 after a long sickness from 2013 due to kidney complications. The Prime minister then declared a public mourning on 9th July, and he was later buried in a state funeral. His burial is regarded as a historical event since he became the third figure to have a state gun carriage funeral service.