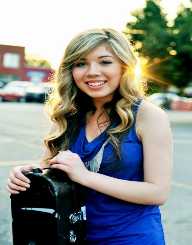 Jennette McCurdy is a young, talented American actress, Screenwriter, and singer. Born on June 26, 1992, she is also a songwriter and record producer. She has done several movies, but best known for roles played in Nickelodeon sitcom, iCarly and Sam & Cat. She has also starred in her production What’s Nest for Sarah? And other series like Zoey 101, Malcolm in the Middle, Lincoln Heights, and True Jackson.

Jennette Michelle Faye McCurdy was born in Long Beach, California and the only girl among four siblings. Though she once said this claim is not entirely true on the podcast You Made It Weird; she is said to have had an interest in acting after watching Star War Episode IV: A New Hope. This was a time her mother had recovered from breast cancer.

Jennette McCurdy made an acting debut at age eight on MAD TV in 2000. Since her first movie, she has played diverse roles in series like True Jackson, VP, Over There and Judging Army. McCurdy has always admired Harrison Ford for the way he acted, and fortunately for her, they were cast in the same film Hollywood Homicide, acting side by side.

Jennette McCurdy through her official website in 2008 announced she would be making a music debut with the release of an album. True to her words, she released her debut single So Close On March 10, 2009, and followed it with Homeless Heart. The latter single was released in honor of her friend Cody Waters who died of brain cancer. She donated 20% of the proceeds to Cody Waters Foundation.

That same year Jennette had a record deal with Capitol Records Nashville. After fans voting for Not That Far Away to be her first single on her upcoming album, it was later released to country radio in May 2010 and iTunes on June 1. She then in August released an Extended Play, with songs like Put Your Arm Around Someone, Not That Far Away and Break Your heart among others.

She released her second single with Capital records, Generation Love in March 2011 for digital download and on the radio in April 2011. McCurdy deal with Capital Records was truncated because according to her, she was in between projects and looking for other opportunities.

Jennette McCurdy in 2014 came out with her initiative by launching the online show What’s Next for Sarah? She was involved in the writing, editing and also star of the series. The show, according to her was centered on her life. McCurdy in 2015 played in role in Between, a Netflix drama series. She was also scheduled to play a role in the Little comedy Bitches.

Jennette McCurdy has been involved in the writing of articles in the Wall Street Journal since 2011. She writes on vast topics of interest. She also writes for The Huffington Post and a columnist for Seventeen magazine. In June 2011, she wrote an article, Off-Camera, My Mom’s Fight With Cancer which was published in the Wall Street Journal. It was based on her mother’s battle with cancer, the challenges and how the family handled it. Her mum died on September 20, 2013, after living with cancer for about 17 years.

Jennette McCurdy has been nominated for several awards and won a few of them. In 2012, she won three awards consisting Australian Kid’s Choice Awards, Meus Premios Nick Brazil and Kids Choice Awards. She also won two in 2010.