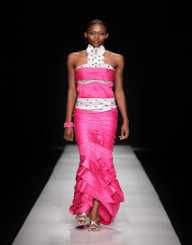 Oluchi Onweagba was born on August 1, 1980. She is a Nigerian super model, entrepreneur, and television personality. She is one of the supermodels from Africa. She moved to New York in order to boost her career in modeling. She is married to Italian fashion designer Luca Orlandi.

Oluchi Onweagba was born on August 1, 1980, in Lagos in Nigeria. She was brought up alongside two siblings. Her mother was a nurse while her father was a civil servant. When growing up, she suffered from low self esteem due to her thin body. She really tried her best to improve her self-image, but every time her thin body would bring her down. Later she was convinced by her friend to go into modeling. She participated in the Nokia Face of Africa completion and emerged a winner. She attended New York University where she graduated with a Degree in management.

Her career began in 1998 when she won the Nokia Face of Africa competition. Oluchi received a contract with Elite Model Management as a part prize from the competition. In the same year, she made her first runaway appearance for designer Marc Bouwer. She also became the cover girl of Nars Cosmetics. In August of the same year photos of her were taken by Steven Meisel for the Italian cover of Vogue. In September 1998, she walked runways in New York, Paris and Milan for brands such as Gucci, Christian Dior, and Chanel. In 1999, she was made the face of Gap Campaign and also did another shoot with Steven Meisel. She appeared on the cover of Surface which is a British magazine. In 2001, she made a runway appearance in Paris for Christian Dior.

In 2002, Oluchi participated in the Victoria’s Secret Fashion show. She later walked in the show for seven years. In 2004, she signed a contract with Cover Girl. In the same year, she walked on the John Galliano fashion show held in Paris. She later walked in the Tommy Hilfiger and Kenneth Cole shows which were held in New York. She did catalog work with Bergdorf Goodman and Victoria’s secret. She also did print work for Lancome. She also starred in a film titled ‘After the Sunset.’ In 2008, she launched her modeling agency ‘OModel Africa’ in Africa. The agency has its offices in Cape Town and Johannesburg, South Africa. Presently she is a host and judge in Africa’s Next Top Model which is a reality show.

In 1998, Oluchi was the winner of the Nokia Face of Africa where she got a contract with Elite Model Management and won one hundred and fifty thousand dollars.

In 2005, she got married to Italian designer Luca Orlandi with whom she has two sons. Oluchi lends her image to campaigns in Africa free of charge. She has an estimated net worth of $2.5 million. She is a role model to many young African girls who want to have a career in modeling.