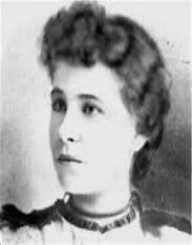 Katharine Lee Bates was an American professor and author, best known for writing the patriotic song “America the Beautiful.”

Katharine Lee Bates was born in the town of Falmouth, Massachusetts, on August 12, 1859. Her mother, Cornelia, was a teacher. Her father, William, was a pastor. He died when she was just a few weeks old. She studied at the Needham High School and the Newton High School. In 1880, she graduated from Wellesley College. At the time, this was one of the rare institutions for higher education that accepted female students. Years later, she spent a year studying at Oxford University in England.

After graduating from college, Katharine Lee Bates started teaching English literature. She taught at Natick High School and Dana High School. In 1888, she joined her alma mater, Wellesley College. She first worked as an instructor, then as a professor. She ultimately managed to become the head of the English department.

Bates helped establish the study of American literature. She started a new college course on the subject. She was also one of the first scholars to write a textbook about it, called American Literature. During her years as a professor, she encouraged and mentored dozens of young aspiring writers. She also served as a guest speaker at several other universities.

Katharine Lee Bates started writing poetry while she was still a student. One of her poems was published in the Atlantic Monthly. A few years after graduating, she released her novel, Rose and Thorn. It depicted the lives of working-class women. It won her a few prizes in the young adult genre.

Bates occasionally edited other people’s books. She also translated some works from Spanish to English. She liked to travel, so she wrote books about her experiences abroad. They include Spanish Highways and Byways, From Gretna Green to Land’s End: A Literary Journey in England, and others.

During a hike on a mountain in Colorado, Katharine Lee Bates was astonished by the beautiful landscape she was seeing. Inspired by that, and by her desire for equality, she wrote the poem “America the Beautiful.” In it, she showcased her love and hopes for her country. The poem was first published in The Congregationalist, on July 4, 1895. In 1904, it was released by the Boston Evening Transcript. The final version was made in 1911. The melody for the song was “Materna,” created by Samuel Augustus Ward. “America the Beautiful” has since become one of the most beloved patriotic songs in the United States.

Bates published a few poetry collections. They include America the Beautiful and Other Poems, Yellow Clover: A Book of Remembrance, The Pilgrim Ship, and others. She also wrote a children’s book, called Little Robin Stay-Behind, and Other Plays in Verse for Children.

Katharine Lee Bates was also involved in social activism. She advocated for the rights of women, workers, immigrants, and poor people. During the Spanish-American war, she served as a war correspondent for The New York Times. She also sometimes wrote for the Atlantic Monthly, Lippincott’s, and other publications. She advocated for the peace movement after World War I. She was a lifelong Republican, but she ultimately separated herself from the Party, because of her support for America’s participation in the League of Nations.

Katharine Lee Bates spent 25 years living with her friend Katharine Coman. They were very close, but it is not known for sure if they had a romantic relationship. She never married, and she rejected all the men who were interested in her.

Bates passed away on September 28, 1929, in her home. She died while a friend was reciting poetry to her. She was buried at the Oak Grove Cemetery in her hometown of Falmouth.