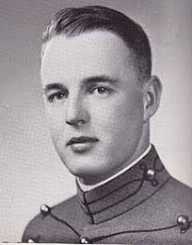 Glenn Woodward Davis was born in the city of Claremont, California, on December 26, 1924. His father, Ralph, was a bank manager and small business owner. His mother’s name was Irma. He had a fraternal twin brother named Ralph and an older sister named Mary. He spent most of his childhood in the city of La Verne, California.

Glenn Davis first started playing football at the Bonita High School in La Verne. He then enrolled at the U. S. Military Academy in West Point, New York. There, he played football under coach Earl Blaik. He started playing fullback and was eventually moved to halfback.

He set several records and became one of the best college football players in history. He earned the nickname Mr. Outside. Apart from football, he was also part of the basketball, baseball, and track teams.

Glenn Davis starred in the low-budget documentary film Spirit of West Point. During the filming, he tore a ligament in his knee and had to undergo surgery. He graduated in 1947 and became a second lieutenant in the U. S. Army. He spent the next three years serving in Korea.

In 1950, Davis started playing for the Los Angeles Rams. The following year, he injured his knee again, so he had to leave the team. This represented the end of his football career. He moved to Texas, where he tried to start a business in the oil industry.

A few years later, he came back to California. He started organizing special events for the Los Angeles Times. He kept his job for a long time, retiring in 1987.

Glenn Davis received the title of College Football All-American Player three times. He received the Heisman Trophy and the Maxwell Award. He was named Associated Press Athlete of the Year and Sporting News Player of the Year. In 1987, the Los Angeles Times started giving the Glenn Davis Award to the best high school football players. In 2003, the U. S. Army started giving the Glenn Davis Army Award to the best players at West Point.

Glenn Davis had prostate cancer. He passed away on March 9, 2005, in La Quinta, California. He was 80 years old. His body was buried at the West Point Cemetery in New York.