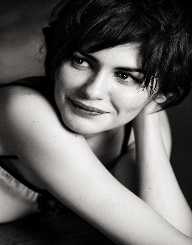 Audrey Tautou is a French actress and model who rose to international fame with her lead role in Amelie (2001). The film was a box office success and won 4 Cesar Awards, 2 BAFTA Awards and was nominated for 5 Academy Awards. It also won the Best Film at the European Film Awards. Audrey Tautou debut film Venus Beauty Institute (1999) also won her critical acclaim and a Cesar Award for Most Promising Actress.

Audrey Tautou is a perfect combination of good looks and talents. She is a highly regarded model and has modeled for brands like Chanel, Montblanc, and L’Oreal.

Audrey Justine Tautou was born on 9 Aug 1976. Her star sign is Leo. Her father Bernard Tautou is a dental surgeon and her mother Eveline a teacher in Beaumont, France. Audrey Tautou has three younger siblings a brother and two sisters. Audrey decided to pursue a career in acting at an early age. She attended acting classes at the Cours Florent.

In 1996 Audrey Tautou was selected to play a minor role in a television movie, Coeur de Cable.  She also received many small roles in other French movies. In 1998 she participated in the 9thJeuneComedien de Cinema Festival in Bezier and won the ‘Best Young Actress Award.’ She was noticed by director Tonie Marshall who cast her in the movie Venus Beauty Institute in 1999.

Audrey Tautou gave an excellent performance and won the Cesar Award for ‘The Most Promising Actress’.

In 2001 Audrey Tautou played the role of a shy eccentric waitress in the romantic comedy, Amelie. Jean-Pierre Jeunet directed this film. The film was a commercial box office hit and appreciated worldwide. It grossed over $33 million and is still the largest grossing French-language film released in the US. The film won four Cesar Awards and two BAFTA Awards. The film was nominated for five Academy Awards. It also got Audrey a lot of attention from Hollywood.

In 2002 Audrey Tautou acted in a British thriller Dirty Pretty Things directed by Stephen Frears and written by Steven Knight. It was about two illegal immigrants in London. The film was nominated for an Academy Award and won a British Independent Film Award in 2003. Audrey Tautou then starred in a romantic war film A Very Long Engagement directed by Jean-Pierre Jeunet. It was based on a novel of the same name by Sebastien Japrisot.

Her first full Hollywood film was The Da Vinci Code based on Dan Brown’s bestselling novel. Ron Howard directed it, and she starred opposite Tom Hanks.

Audrey Tautou played the lead role in the biopic of fashion designer Coco Chanel named Coco before Chanel. This was a box office hit and was nominated for several awards.
She appeared in the music video I Love Your Smile a song written by British singer Charlie Winston.

She was named as the next spokes-model for Chanel No 5 in 2009 replacing Nicole Kidman.

Audrey Tautou is a French citizen. Though she has acted in Hollywood films, she considers France her base. She is a private person and likes to keep her personal life away from media.