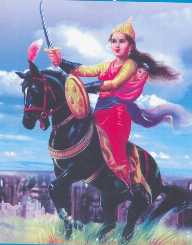 Rani Lakshmi Bai was born on the 19 November 1828 at Kashi Varanasi in India to Moropant Tambe and Bhagirathi Sapre. Her family nickname was Manu. She was around three years old when the family moved to Bithur when her father became a member of the court of Baji Rao II. Because of her father’s position at court, Lakshmi Bai grew up in the palace. Her mother died when she was four, and her father raised her. She grew up learning to do martial arts and swordfight as well as ride horses and elephants. Her childhood friends included Tatya Tope and Nana Sahib.

An astrologer predicted that the little girl would one day be a queen and bring widespread fame to her family. Lakshmi’s father took heed of the astrologer’s advice and groomed his daughter for a noble life.

A marriage proposal was received from Tantia Dikshit, a Brahmin astrologer with the prospective bridegroom being the Maharaja of Jhansi, Gangadhar Rao. Jhansi District was in trouble because the previous King had been incompetent. Unrest together with natural disasters and other problems led Gangadhar Rao to seek assistance from the British to help control his kingdom. The British therefore took control of Jhansi in 1838.

Lakshmi Bai married the Maharaj of Jhansi, Gangadhar Rao in 1942. In 1851 she gave birth to a son, Damodar Rao, who died in infancy. There were no more pregnancies, and when the Maharaja was dying, he adopted a cousin’s son shortly before his death, leaving instructions that his widow becomes regent.

Applying the law of the Doctrine of Lapse, the British Governor-General of India, Lord Dalhousie refused to recognize Lakshmibai as regent or the boy as heir. Instead, an East India Company official was left in charge of administrative matters in Jhansi. Lakshmi Bai refused to accept the British decision and would not cede Jhansi to the British.

When the Indian Mutiny broke out in 1857, Lakshmi Bai was declared the regent of Jhansi and ruled on behalf of her adoptive son. She proved herself to be a capable leader and a good organizer who led the rebels in the Bundelkhand area.

In 1858, General Hugh Rose arrived and captured Saugor (Sagar) in February that year. Advancing upon Jhansi the following month, surrounding the fort and engaging the rebels in battle. Lakshmibai’s troops were beaten but, along with her palace guard, she managed to escape. They headed to the east where she joined forces with other rebels including Tantia Hope. After fleeing to Gwalior in May 1958, the rebel army was able to occupy the city. Then in June 1858 British forces attacked and on the 18 June 1858, Rani Lakshmi Bai was killed in battle.