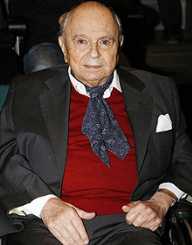 Michael Cacoyannis was born on June 11, 1921, in Limassol, Cyprus. His parents were Sir Panayiotis Loizou Cacoyannis and Lady Cacoyannis. Cacoyannis is also known as Mihalis Kakogiannis and Michalis Cacoyannis.

In 1939, Michael Cacoyannis moved to England for his post-secondary studies. Here, he studied law. He completed his Bar exam in 1943.

In the early 1940’s, Michael Cacoyannis went back to school in England, but not for the law. He attended the Central School of Dramatic Art. Here, his studies primarily focused on acting and filming techniques.

While Michael Cacoyannis studied to become a lawyer, he did not work in law. One of his first professional careers was working as a news announcer in Cyprus as a member of the BBC World Service. He worked here for several years, eventually working as a producer for the service. It was around this time that he realized he could make a career out of film and television. So, during World War II, he went back to England to study film.

In the late 1940’s through the early 1950’s, Michael Cacoyannis was struggling to find work as an actor. He performed in several small stage shows, but he could not manage to make a name for himself. Around this time, he was literally trying to make a new name for himself, as he sometimes used the stage name Michael Yannis.

In 1952, Michael Cacoyannis moved to Greece to try to work on his film career outside of England. In 1953, he earned his first job as a film director. In this year he directed Windfall in Athens. The film was a success, and it was exactly what Cacoyannis needed to kick off his new career in the film industry.

The rest of the 1950’s was a highly productive time for Michael Cacoyannis.  He directed the films Stella, A Girl in Black, and A Matter of Dignity between 1955 and 1959. He was also the writer for all three of these movies.

The 1960’s were another wildly productive time for Cacoyannis. In this decade he wrote and directed five movies, two of which he also produced. These films are the following: Our Last Spring, The Wastrel, Electra, Zorba the Greek, and The Day the Fish Came Out. The 1960’s were arguably his most impressive decade in his career, as many of his films were successful and won awards.

In 1971, Michael Cacoyannis made a sequel to his film Electra, which was called The Trojan Woman. The third and final film in this trilogy was called Iphigenia and was finished in 1977. Also in the 1970’s he had a hand in making the documentary,  Attila 74: The Rape of Cyprus.

In the 1980’s, Michael Cacoyannis was only involved with one movie: Sweet Country. The 1990’s were also not productive, as he was getting old. In 1993, he directed and wrote Pano, Kato Kai Plagios. He made his last film in 1999, which was called The Cherry Orchard.

After he retired from making films, he focused his attention on other areas involving the art. He donated money to several architectural projects, like the illumination of the Acropolis and the study of the Olympian Zeus Columns.

Over his long filming career, Cacoyannis’s films have won several prestigious awards. Some of his most impressive awards are listed below.