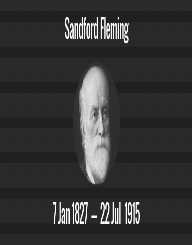 On January 7, 1827, Sandford Fleming was born in Kirkcaldy, Fife, Scotland. His parents were named Andrew and Elizabeth Fleming, and he had an older brother named David Fleming.

Fleming began work early, first apprenticing as a surveyor when he was only fourteen years old. When he turned eighteen in 1845, Fleming and his brother David decided to immigrate to Canada. The brothers traversed much of Canada before finally settling on Peterborough Ontario in 1847, two years after their arrival. The brothers chose to live in Peterborough with a few cousins, and Fleming eventually qualified as a Canadian surveyor in 1849, when he was 22 years old.

Soon after arriving in Peterborough, Sandford Fleming bonded with the family of his future wife, Ann Jane Hall. However, it wasn’t until ten years after his arrival in Canada that the pair became romantically involved and eventually married.

Fleming designed the first Canadian postage stamp in 1851. The stamp aptly titled the Threepenny Beaver, depicted a drawing of a beaver in its natural habitat. The stamp was used throughout what was known at the time as the Province Of Canada, today known as the southern areas of Ontario and Quebec.

Sandford Fleming served in the Canadian Army for several years, first serving in the 10th Battalion Volunteer Rifles of Canada and later being promoted to captain with the new year 1862. Fleming continued to serve in Canada’s Army until he retired in 1865.

In 1855, ten years after his arrival in Canada, Sandford Fleming married his longtime friend and recent romantic partner, Ann Jane Hall. The two went on to have a vibrant family life and nine children together. However, two of their children did not survive childhood and died at young ages. Fleming was a devoted family man, even bringing his oldest son, Frank Andrew Fleming, with him when he made a Western expedition to as yet unknown parts of Canada in 1872. In 1888, Fleming’s wife Ann Jane Fleming died. Fleming’s niece, Elsie Smith, travelled to Canada to preside over Flaming’s household and affairs. Even after his wife’s death, Fleming still saw the Halls, his in-laws, often and remained close to them until his death.

Shortly after Fleming arrived in Canada, he hosted more family who also decided to travel from Canada to Scotland to be closer to Fleming, his brother, and their other family members. This included his father Andrew Greig Fleming, and six of his children.

Sandford Fleming worked as a surveyor for much of his life, primarily being employed by railways. Fleming went on to work as an Assistant Engineer of the Northern Railway of Canada in 1852, and by 1855, he had been promoted to Chief Engineer. This promotion came at the expense of Fleming’s colleague, Frederick William Cumberland, with whom Fleming had started the Royal Canadian Institute. Fleming’s promotion was intended to oust and replace Cumberland as Chief Engineer. By 1862, Cumberland had taken back his position as Chief Engineer, at which time the roles were reversed, and Fleming had been ousted from the position.

Sandford Fleming went back to work as a surveyor at this time, accepting a position as chief governmental surveyor of the Nova Scotia area. His most significant project was the construction of a railway that was to provide transportation between Truro and Pictou. Fleming was tasked with building the railway with his own money as a penalty for not accepting supply prices he believed were too high. Interestingly, Fleming was able to complete the project and not only turned a profit for himself but savings for the government.

Fleming had a lot of other outstanding contributions to the Canadian Railway system, not least of which was his promotion to director of the Canadian Pacific Railway in 1884.

The invention of Worldwide Standard Time

In 1876, Sandford Fleming missed a train while travelling in Ireland due to a misprint of the train’s schedule as a PM instead of an AM time. This led Fleming to the proposition of worldwide standard time and time zones. Fleming proposed the idea of local time zones tied to universal standard time. He shopped the concept to different conferences and institutes for over eight years, until he was finally able to make a convincing argument for the worldwide standard time at the International Meridian Conference in 1884. While the conference was reluctant to accept the specific timezones suggested by Fleming, they did allow the idea of Universal Time. By 1929, every major country in the world had accepted and adapted to their structured time zone.

In 1880, Sandford Fleming was forced out of his job as a surveyor and engineer due to the privatization of railways. He decided to retire from railway work, but he did not stop working altogether. He accepted the position of Chancellor at Queen’s University in Ontario.

In 1897, Fleming was knighted by Queen Victoria.

Sandford Fleming finally retired late in his life, and it is believed that a severe depression led to his death in 1915. Shortly before his death, he granted the deed to his home and estate to the city of Halifax. The estate is now known as Sir Sanford Fleming Park or Dingle Park.

Fleming was designated as a National Historic Person in 1950 and has also appeared on two postage stamps. He was represented in a Google Doodle on his 190th birthday in 2017.