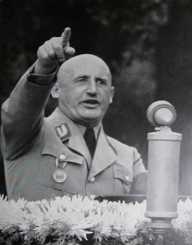 Julius Streicher was born on February 12, 1885. He was a German politician. He was a member of the NSDAP which was famously known for inciting Germans against the Jews. He was also an author.

Julius Streicher was born on February 12, 1885, in Bavaria. He was born to Friedrich Streicher who was an elementary school teacher and Anna Nee Weiss. He started his career by working as an elementary teacher. He joined the German Army in 1914. He was later promoted to lieutenant where he was awarded the Iron Cross.

Germany was not victorious in World War I, and so Julius Streicher joined the ‘Schutz-und-Trutz-Bund.’ This was a group that worked against the Bavarian Republic. He later co-founded the German Socialist party at that time which was focused on spreading anti-Semitic movement and Catholicism. He had an anti-Semitic newspaper known as ‘Der Sturmer’ which spread the intolerance of the Jews. The newspaper assisted the Nazis in hating the Jews more. He was later relieved from his post as a teacher because of the negativity he spread about the Jews. He became the leader of a local Nazi party which operated outside legal boundaries.

In 1924, Julius Streicher held a position at the Bavarian Parliament, a post that he held up to 1932. He was later appointed the district leader of Middle Franconia after Hitler was released from Jail. He also became a member of National Socialist Party where he served as the Chairman of the Central Committee which boycotted agitation and the repulsing of Jewish atrocity. In 1933, he led the boycott of Jewish businesses.

Julius Streicher wrote the book ‘The Poisonous Mushroom’ where he unfolded the dangers of the Jewish religion. He was later accused of humiliating Reichmarschall Goering in public. The Supreme Court ordered that he be permanently stripped of his leadership position in the Socialist Party. In 1945, he was captured by the United States forces who brought him to trial in front of the International Military Tribunal. He was accused of committing crimes against humanity. In 1946, he was executed in Nuremberg for his offences.

In 1913, Julius Streicher married Kunigunde Roth with whom he had two sons Lothar and Elmar. In 1945, he married his second wife, Adele Tappe. In the same year, he was captured by the United States Forces and tried for crimes against humanity. He was executed on October 16, 1946, in Nuremberg by the International Military Tribunal.