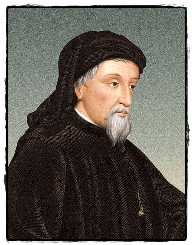 Geoffrey Chaucer was born in September 1343. He was an English poet. He was also an author, astronomer, philosopher and alchemist. He is also known as the father of English Literature. He was the first poet to be buried in the Poet’s Corner of Westminster Abbey. He had a career in the civil service as well as a diplomat and bureaucrat. His works include ‘The Book of the Duchess,’ ‘House of Fame’ and ‘The Canterbury’ among others.

Geoffrey Chaucer is believed to have been born around 1343 in London, England. He was born to John Chaucer and Agnes Copton. His mother inherited a lot of property from her uncle, Hamo de Copton. In 1357, he became the page of Elizabeth de Burgh. Elizabeth was the Countess of Ulster. He worked as a courtier, civil servant, and a diplomat. He was also worked for the King by collecting and inventorying scrap metal. In 1359, he travelled with Lionel of Antwerp a part of the English army. Lionel was the husband of Elizabeth.

In 1360, Geoffrey Chaucer was captured during the siege of Rheims, but he was later released after paying a ransom of sixteen Euros. He travelled to Spain, France, and Flanders as a messenger. In 1366, he married Philippa Roet. His wife was a lady in waiting to Edward III’s queen, Philippa of Hainault. He had four children with his wife, Thomas Chaucer, Agnes, Lewis Chaucer and Elizabeth.

In 1367, Geoffrey Chaucer became a member of the Royal Court of Edward III as a valet de chamber. He wrote his book ‘The Book of the Duchess’ on his travels abroad. He dedicated the book to Blanche of Lancaster. In 1370, he travelled to Picardy and visited Genoa and Florence in 1373. During his travels, he was introduced to medieval Italian poetry. In 1374, he began working as a comptroller of the customs for the port of London, a post that he held for twelve years. He wrote most of his books during this period.

In the 1380s Geoffrey Chaucer started working on his famous work ‘The Canterbury Tales.’ In 1386, he was appointed a member of the Parliament of Kent. The following year his wife died. In 1389, he was appointed the clerk of the King’s works where he organized the king’s building projects. He conducted repairs on the Windsor, St. George’s Chapel and Westminster Palace.

Geoffrey Chaucer's first work was ‘The Book of the Duchess.’ He later wrote ‘Anelida and Arcite’ and ‘House of Fame.’ When he was a comptroller, he wrote ‘Parlement of Foules,’ ‘Troilus and Criseyde’ and ‘Legend of Good Women.’ In the 1380s, he began his famous work ‘The Canterbury Tales.’ It was a collection of stories narrated by fictional pilgrims on the road to the cathedral at Canterbury. He translated works such as ‘Consolation of Philosophy’ and ‘The Romance of the Rose.’ He also wrote ‘Treatise on the Astrolabe’ which he dedicated to his son. This work portrayed to people that Chaucer had considerable knowledge of science.