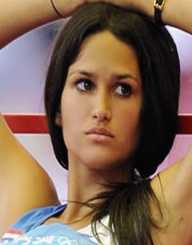 Athlete, Model and actress-cum-star javelin thrower for Paraguay, Leryn Dahiana Franco Steneri was born on March 1, 1982, in Asunción, Paraguay. Her parents hailed from Uruguay and fully supported her passionate enthusiasm towards athletics and sports during her formative years. She initially played football during her high school days and later began participating in athletic events like triple jump and javelin throw.

In 2004, she represented Paraguay in Javelin Throwing at the Summer Olympics held at Athens, Greece and was placed in the 42nd position. She recorded a distance of 52.24 meter, her personal best score in the 2007 Pan American Games. However, her popularity soared to a new height after her participation in the 2008 Beijing Olympics where she finished at the 51st position after recording a phenomenal 45.34-meter throw.

Leryn Franco's beautiful features and stunning look facilitated her entry into the modeling world. She competed in several beauty pageant competitions including the 2006 Miss Universe Paraguay, where she was the runner-up and the Miss Bikini Universe Pageant held in the same year. She became an international sensation when she was featured in the 2011 Sports Illustrated Swimsuit Issue.

In 2013, she began her career as an actress portraying the role of the younger version of the title role in the film ‘Eliza Lynch: Queen of Paraguay.’

She launched her calendar in 2007 after being photographed by Martin Crespo.

Leryn Franco is not married yet. However, she hogged the limelight for her few relationships with high profile celebrities over the years. She dated the world’s number one tennis player Serbian Novak Djokovic for a while before breaking up with him. After that, she began dating Ivan Almeida – a Cape Verdean professional basketball player and in August 2014 got formally engaged to him.

Her estimated net worth at present is more than $3,00,000, and she is enjoying a luxurious life with her present boyfriend, Ivan Almeida.