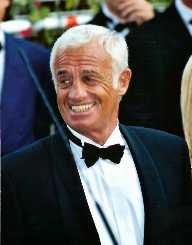 Jean-Paul Belmondo is a French actor who is considered one of the French film renaissance fathers during the 1960s.

Jean-Paul Belmondo was born on April 9, 1933, in the Seine, in the Paris Metropolitan area. He is the son of Paul Belmondo, a Frenchman of Italian origin. He is a sibling to Alain and Muriel Belmondo. He grew up is Hauts-de-Seine and was introduced to arts from an early age. His father Paul was an established sculptor in Paris. His education was punctuated with periods of turbulence due to his arrogant due to his incoherent childhood behavior. He became mischievous and lost interest in academics. Despite that, he explored his passion for sports. Belmondo chose boxing over soccer as a future career of choice.

He entered the boxing ring as a competitive amateur boxer on May 10, 1949. He made an impressive performance by knocking out his opponent Rene De Marais in the first round. He went to score three consecutive first-round technical knockouts during his brief boxing career. He retired from boxing in 1950. He joined the compulsory military service as a private. He served in military tours of North Africa and stayed in Algeria for half a year.

After his military service, Jean-Paul Belmondo joined the National Conservatory of Dramatic Art School in Paris. Belmondo had a charming and imposing character in the acting school. He also posted positive scores in his studies. His negative attitude towards the lecturers inhibited his elevation to the top of the graduating class. He graduated from the acting school in 1956 after studying for three years.

Jean-Paul Belmondo started his acting career on the theater stage in 1953. Belmondo starred at the Atelier Theater in Paris. He featured in two stage productions in succession within a year. He debuted with the play Medee and then cast in Zamore. He made several tours in France with the theater group in the following months. He transitioned into the film acting in 1956.

He got small roles in almost all his first four years of film acting career. With a commanding charm and authority on the screen, the directors preferred to impose his character based on his looks. His face had been disfigured after several blows during his boxing career. His attitude compounded the directors resolve to give him criminal roles that he easily depicted.

Jean-Paul Belmondo made his first film in the 1956 production Moliere. He continued featuring in smaller roles in films like On Foot, On Horse, and On Wheels produced in 1957, Be Beautiful But Shut Up done in 1958 and another 1958 film Young Sinners. He did other films before having a breakthrough in the 1958 French film production Les Copains du Dimanche.

Belmondo cast his first lead role in the film. He appeared in another lead role in the movie Breathless produced in 1960. The film cemented his entry into the film industry as a rising star. He played the role of a hardened street crook. He portrayed his natural toughness on the screen, adding his comic nature to his imposing natural flair.

Jean-Paul Belmondo decided to break away from the tough criminal character most of his followers associated him with. He cast as a scholarly intellectual in the 1961 film Two Women. He played the role of a highly moral priest in the 1961 film Leon Morin, Priest. His critics applauded his acting abilities demonstrated with his easy change of roles and sensitivity.

He caught the attention of film directors with his ability to cast in diverse roles. Belmondo got invitations to feature in action movies. He made the transition with ease. He appeared in the 1962 film Sword of Blood. Belmondo cast in the 1964 film That Man from Rio. He did three other action based movies in 1964. These were Greed in the Sun, Backfire, and Male Hunt. The transition to the action-packed films propelled Belmondo into a star in the French film industry. The four films made it to the top twenty in the French film ratings in 1964.

In the following years, Jean-Paul Belmondo cast in other famous films like the 1966 productions Lost Command, and Tender Scoundrel. Belmondo moved out of his French circles to do some English language films like Is Paris Burning? and Casino Royale, produced in 1966 and 1967 respectively. He took a film sabbatical from 1967 to 1968 after which he never appeared in any other Hollywood English films.

He tried his trade in film production with considerable success in the 1970s and 1980s. Some of the films he directed included Bad Luck produced in 1972, Stavisky in 1975 and Incorrigible done in 1974. He made another transition to a more mature personality. He acted in other films during the late years of his career. Some notable films include the 2000 film Amazon, and 2008 production A Man and His Dogs.

Jean-Paul Belmondo married Elodie Constant from 1952 to 1968 and had three children before they divorced. Belmondo remarried Natty from 2002 to 2008 and had one child. He had other affairs after his second marriage.

He published his memoirs in 1963 under the title Thirty Years and Twenty Five films.

Jean-Paul Belmondo won several accolades during his film career. He is praised at home for staying in France despite having lucrative offers to live and work in Hollywood.