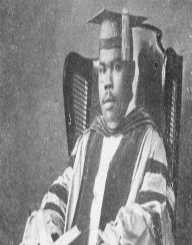 Born on August 17th, 1887, Marcus Garvey rose to become a famous activist more so to the people of the Black race. He was a politician, journalist and a publisher who championed the Pan-Africanism movement and Black Nationalism. With regards to this, he went on to become the founder of Universal Negro Improvement Association and African Communities League - UNIA-ACL. In addition to this, he later came up with Black Star Line, which was a shipping line that advocated for the return of African diaspora to their homelands.

Marcus Mosiah Garvey, Jr. was born on August 17th, 1887. His place of birth was in St. Ann's Bay, Jamaica. He was the youngest son of Marcus Mosiah Garvey, Sr. and Sarah Jane Richards. Her mother worked as a domestic worker. In a family of eleven children, Garvey and his sister called Indiana were the only ones that survived. Garvey’s passion for reading books developed as a result of his father’s library. While he was still young, he went to elementary schools located in St. Ann's Bay. While schooling at these institutions, young Garvey began to experience racism among other students.

In 1907, Marcus Garvey participated in printer's strike which gave rise to his strong inclination to political activism right from the time he was young. In 1910, the young activist left Jamaica and went on to work as a newspaper editor. This gave him a good platform where he could write about his experiences and activist’s desires. For example, he first emphasizes exploitations of plantation workers. Two years later, he migrated again to London where he lived until 1914. Here he enrolled at Birkbeck College where he pursued philosophy and law. During this period, he worked with African Times and Orient Review.

After inspiration that Marcus Garvey got while studying law in London, he went back to his home country and founded Universal Negro Improvement Association – U.N.IA. The main goal that he had in mind was to bring together African Diaspora and to form a government of their own. Garvey also formed a partnership with Tuskegee Institute’s founder, Booker T. Washington. He wanted a similar institution to be established in Jamaica. As a result of this, he had to make a trip to the U.S. where he would raise funds for the project. While residing in New York City during his trip, he came up with U.N.IA chapter that would fight for the freedom of blacks.

Shortly after, Marcus Garvey published Negro World newspaper in 1918 to ensure that his message reached far and wide. A year later, Black Star Line was launched. This was a shipping company that would unite all Africans in trade. With the help of the company, Africans in the Caribbean, America, Canada, Central and South America could easily trade. Negros Factories Association was also launched with the purpose of bringing together factories that would manufacture commodities capable of selling in Africa and the Western hemisphere.

Besides the fact that Marcus Garvey strongly conflicted with W.E.B. Du Bois, he also had another enemy from the Federal Bureau of Investigation (F.B.I). This was J. Edgar Hoover. He considered Garvey to be a dishonorable agitator to the people of the black race. His efforts to try and deter his activism goals led to the hiring of an F.B.I agent from the black community. This was for the sole purpose of spying on Garvey.

Marcus Garvey along with other officials from the Black Star Line shipping company was faced with charges of fraudulent activities. This led to their conviction a year later in 1923. Garvey was convicted to face five years in prison. He appealed his conviction with the claims that the charges were politically motivated, but his efforts did not help. After facing his sentence, he was released in 1927 and immediately deported to his home country, Jamaica. He continued his activism career, but things were not the same as before. He had lost the support of many people from the black race.

Marcus Garvey passed away on June 10th, 1940. He had suffered several strokes which led to his early death at the age of 52.

Marcus Garvey’s strong message to the society remains embedded deep within. During the onset of Civil Rights movement during the 1950 and 1960s era, his teachings inspired many. In tribute to his historical contribution, Ghana called its shipping line after the Black Star Line. Also, it named its national football team, Black Stars. This was in honor of the activist legend Marcus Garvey.