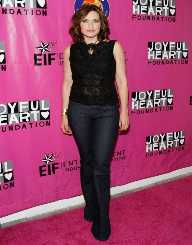 If you have watched Law and Order; the special victims unit, then you have come across the actress Mariska Hargitay as Olivia Benson. Though she had made appearances in several movies and TV series before, it is this TV hit that made her a name in the film industry.

Mariska Hargitay was born on 23rd January 1964 in Santa Monica, California, being a daughter of the Hollywood legend Jayne Mansfield. At the age of three, Mariska together with her two older siblings and their mother were involved in a tractor trailer accident when their car rammed behind it. They were driving between Biloxi and New Orleans, Louisiana. The accident led to the death of her mother and other two adults involved in the incident.

Luckily for the children, they escaped with minor injuries only. In an interview later in life with the 'Good Housekeeping' program, that incident greatly affected Hargitay and it took time before the reality could set in. The loss of a parent at that age was the worst experience.

Her mother's demise led her to move and stay with her father in Beverly Hills. Mariska Hargitay attended Marymount High School. In 1982, she became Miss Beverly Hills and opted to study theater at the UCLA. Her TV acting debut came in 1984 with Falcon Crest, and it forced her to drop out of college to fully engage into acting.

1985 marked her first appearance on the big stage in Ghoulies. It was all about hard work before making it to the big screen and not a one-day affair. Her career did not take off quickly. She had appeared in several series and movies before Falcon Crest gave her a recurring role in 1988.

Acting roles were proving a challenge and rare to land one. That is why in 1990 to 1995 she engaged in several shows again as she pursued significant roles in other films. Something big was coming in 1997 that took her to another level in the movie industry.

Acting as Cynthia Hooper in the ER drama, Mariska Hargitay was given a platform to advance her acting career in 1997. The role lasted up to 1998 season that secured her a slot in the Law & Order: SV Unit that was a spin off from the Law and Order series that was a hit at some point for over a decade.

Here, she played the role of Olivia Benson “Liv” a detective focusing on sex crimes. The series drew more viewers and was a big hit compared to the original series. The 'Liv' role won her several awards. In 2005, she was awarded the Golden Globe, and in the following year 2006, being the lead actress in the drama series led her to win the Grammy.

Away from SVU, Mariska Hargitay is a busy person with various causes and her family. She is married to actor Peter Hermann, whom they met in 2004 in the setting of SVU. Two years down the line, she gave birth to a son. In 2011, they adopted Amaya, a daughter and soon after, went to adopt another son called Andrew.

Drawing lessons from the Liv Benson character, Mariska Hargitay has established the Joyful Heart Foundation that provides recovery to sexual abuse victims. The foundation was inspired by the subject matter revolving around the issue of the hit show series, Law & Order: SVU. The charity foundation has been in existence since 2004, and a lot of sexual abuse victims have been treated, rehabilitated and counseled to cope well with their life going forward.