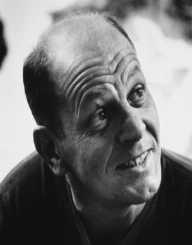 American artist Jackson Pollock was born in Cody, Wyoming in 1912. Pollock’s father LeRoy Pollock was a farmer. And a land surveyor. Pollock often went on surveying trips with his father and was exposed to Native American art and culture. Jackson grew up in Arizona and Chico, California. Pollock was the youngest of five boys. In 1930, Pollock moved to New York City where his brother was living.

Jackson Pollock studied art at the Student's League, New York City. His tutor was Thomas Hart Benton, a regionalist painter. Pollock worked in the regionalist style in the 1930s and was also influenced by Diego Rivera and Surrealism. In 1939, Pollock had the opportunity to view a major Picasso exhibition at the Museum of Modern Art in New York City. This show exposed him to the best European modernism and had a significant influence on his future output.

During the Depression years, Jackson Pollock and his brother Sanford, both found work in Roosevelt’s Public Works of Art Project. This project saw some artists contributing including Willem de Kooning and Mark Rothko.

After World War II Abstract Expressionism was beginning to emerge and Pollock was part of this movement. He became famous for his drip paintings in the 1940s. His basic methods were quickly gaining attention, and in August 1949, Life magazine featured him with the rhetorical question as to whether he was the most celebrated living painter in the United States.

Guggenheim helped out with arranging a loan so that Krasner and Pollock could move into a country farmhouse. She also offered him a stipend. Pollock enjoyed living in the country again and felt energized. In 1946, he had converted a barn into a private studio and worked on his drip technique. By 1947, Guggenheim arranged for Pollock to be contracted to Betty Parsons who guaranteed to give him cash for artwork sales.

After appearing in Life magazine, Pollock’s life changed as fame beckoned. Some artists were jealous of his popularity. Critics started attacking him, and it made him question himself as an artist. His supportive partner Krasner steadied him. He had an exhibition at Betty Parsons Gallery in 1949, and it quickly sold out. Pollock was suddenly the most famous avant-garde painter in America. The pressure of fame made Pollock start drinking.

Jackson Pollock next exhibition at the Betty Parsons Gallery in 1950 was a failure, nothing sold. He had stopped using the drip method and was painting in monochrome, sometimes on a black background. Today these paintings are viewed as masterpieces; but at the time, the art scene was not ready for them. His drinking continued, and he got involved in pub fights. Krasner, desperate to help him, decided to enlist his mother’s assistance. His mother's intervention helped a little, Pollock started painting again, and during this period, he finished his masterpiece, The Deep. The demands of fame continued to grow and cause conflict in Pollock, his alcoholism continued.

Krasner by this time was starting to feel the strain of living with Pollock. By 1956, he was no more extended painting and had started seeing other women. Krasner left and went to live in Paris for a while. It was while she was way that he was drunk drinking when he crashed car. He was killed outright. He was forty-four years old. Krasner subsequently returned. She managed his estate and when she died setup the Pollock-Krasner Foundation. The property in 1984, when she died, was worth $20 million.

In the late 1930s, Jackson Pollock had a severe problem with alcohol. He consulted a Jungian analyst for this issue, and this led to an interest in symbolism Lee Krasner, an artist, and painter, met Pollack sometime in the early 1940s. They married in October 1945 and moved to a farmhouse on Long Island. Krasner by this time was helping to manage Pollock’s output. The stress of fame made Pollock start to drink again in the 1950s. Krasner subsequently left him and went to live in Paris. After Pollock’s death, she returned and managed his estate, setting up a foundation for emerging artists as part of their shared legacy.

Pollock’s art continues to polarise people. Some still ask how dripping paint from a can onto a large canvas can be considered art. Whatever the debate, a painting of Pollock’s sold for US$140 million, at that time a record. (NPR All Things Considered 2012).

Ed Harris directed and starred in a film about the artist entitled. Pollock (2000) Ed Harris played Pollock, while Marcia Gay Harden played the part of Krasner.