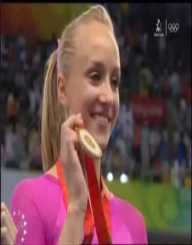 Nadia Elena Comaneci was born on November 12, 1961, in Onesti, Romania. She grew up in the Socialist Republic of Romania when the Marxist-Leninist one-party communists ruled the government.

Nadia Comaneci had a younger brother. Her parents separated in the 1970s, and her father moved to Bucharest. She and her brother were both raised in the faith of the Orthodox Church. Her mother encouraged young Nadia to take gymnastics classes because she was always active and full of energy. She went to the Politechinca University of Bucharest and graduated with a degree in Sports Education which allowed her to be a gymnastics coach.

Nadia Comaneci began her gymnastics career while still in kindergarten. When she was six years old, Comaneci was chosen to attend the Bela Karolyi's experimental gymnastics school. In 1968 she became one of the first students at the newly established gymnastics school in Onesti.

By 1970, Comaneci began entering competitions with her hometown team. She became the youngest gymnast in history to win the Romanian Nationals. The following year she participated in her first international competitions and won her first title. She continued to compete in numerous contests in Romania, Hungary, Italy, and Poland.

When she was 11, Nadia Comaneci won the all-around gold and many other titles. Her first major success came when she was 13 years old when she won several silver and gold medals at the European Women’s Artistic Gymnastic Championships in Norway.

In 1976, Nadia Comaneci competed in the American Cup and gained a perfect score. Later that year, she also participated in the 1976 Summer Olympics and won the gold medal, when she was only 14 years old. This was the first time in the modern Olympic gymnastics history that someone was awarded a perfect 10 score. She also won gold medals for the individual all-around and the balance beam, as well as bronze for the floor exercise and silver as a part of the team all-around. Back in Romania, she was awarded the honor of Hero of Socialist Labor.

In 1977, the Romanian Gymnastics Federation removed Comaneci’s longtime coaches the Karolys and sent her to Bucharest to train at the August 23 Sports Complex. Nadia Comaneci was extremely unhappy about the change, and her performance suffered. She entered the 1978 World Championships, at the time 16 years old, taller and heavier. She remained the 4th in all-around but still managed to win gold on the beam and silver on vault.

After this, Nadia Comaneci was allowed to return to her previous coaches and the following year won her third consecutive European all-around title.
Comaneci participated in the 1980 Summer Olympics in Moscow, which the United States boycotted. She won two gold medals on the balance beam and floor exercise, and silver medals on the team all-around and individual all-around. Karolyi believed that she was scored unfairly, and her protests were captured on television.

The government believed that Nadia Comaneci had humiliated them, making the life for Karolyi very difficult. In 1981, Comaneci was sent on the Nadia ’81 tour in the United States. By the end of the trip, her coaches defected and offered Nadia to come with them. She had no interest in the matter, and she refused.

However, since Karolyi’s defected, Comaneci’s life became increasingly difficult. Nadia Comaneci was closely monitored by the government to prevent her attempt to flee the country and was also forbidden to travel outside of Romania. The only time she was allowed to travel outside was when she attended the 1984 Summer Olympics in Los Angeles. However, she only participated as a spectator and was closely watched all the time.

Nadia Comaneci was still forbidden to leave Romania, and in 1984, she decided to retire, and her retirement ceremony was held. On November 27, 1989, Comaneci defected with a group of other Romanians. She traveled mostly during the night and on foot and went through Hungary, Austria and made her way to the United States. She received help from Constantin Panait, who had plans to become her manager in the States.

Later in 1990, Comaneci was invited to stay in Montreal, Canada and to reunite with Bela Karolyi. She was offered to do some exhibitions and appearances in the Olympic stadium and to stay in Canada. After this, Panati left her and never contacted Comaneci.

In Montreal, Nadia Comaneci again reunited with an old friend from her time at the Olympics, Bart Conner. He later invited her to Oklahoma, to help run a gymnastics school. She and Conner were friends, before developing a romantic relationship. They became engaged and married in 1996. The couple has a son, born in 2006.

Comaneci became a citizen of the United States in 2001. She has also served as the honorary president of Romanian Gymnastics Federation and Olympic Committee. She and Connor own the Bart Conner Gymnastics Academy, the Perfect 10 Production Company and are the editors of International Gymnast Magazine.