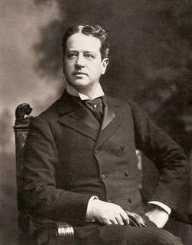 George Washington Vanderbilt II was an American art collector and a member of the wealthy Vanderbilt family. Born on November 14, 1864, he is best known for his 250-room mansion, which is the largest privately owned home in the United States. The Vanderbilt family earned their wealth through railroads, steamboats, and other business ventures.

As the youngest child of his parent, George Washington Vanderbilt became the favorite of his father. Described as a shy and introvert child, he had interest in reading, philosophy, and art collecting. He was home-tutored and later schooled at local private schools. With his love for books, he acquired a private library with over twenty thousand volumes. He traveled extensively and with that learned several foreign languages. He enrolled at the Columbia University and graduated with honor.

His father died in 1885of stroke and left a fortune of $200 million, of which the sizeable amount went to his two older sons Cornelius Vanderbilt II and William K. Vanderbilt. George Vanderbilt received $5 million and five million from a trust fund. George Washington Vanderbilt had previously received $1 million from his father during his 21st birthday and another $1 million from his grandfather. Vanderbilt was put in charge of the family farm at New Dorp and Woodland Beach. His older brothers ran the core business of the family. He joined the New York Society of the Sons of the American Revolution in 1891.

George W. Vanderbilt lived in one of the family residences into his adult age until he decided to construct his own house and an estate in 1888. To achieve his intended purpose, he acquired 130,000 acres of woodland in North Carolina. He then sought the services of architect Richard Morris Hunt for the design of a limestone house modeled on the Chateau de Blois among other chateaux of the Loire Valley. The building, which has about five acres of floor space, is regarded as the largest private home to be constructed in the United States of America.

While at Baltimore, George W. Vanderbilt lived a life of a country gentleman with a great interest in horticulture and agriscience. He supervised scientific farming experiments, animal bloodline breeding, and forestry. His vision was to manage Baltimore into a self-sustaining estate.  Baltimore became the first professionally managed forest in the United States and later housed the Biltmore School of Forestry established by Dr. Carl A. Schenck in 1898. The school became the first of its kind in North America.

George W. Vanderbilt was married to Edith Stuyvesant Dresser on June 1, 1898, at the American Cathedral in Paris, France. The couple had a daughter Cornelia Stuyvesant Vanderbilt. George and Edith were one of the lucky people who luckily evaded the catastrophe of Titanic. The couple had book passage on the ship but later changed their plans. George Vanderbilt died on March 6, 1914, of an appendectomy in Washington D.C. He was interred in the Vanderbilt family mausoleum at the Moravian Cemetery in New Dorp in Staten Island, New York. He was survived by his wife and daughter. Edith sold 86,000 acres of the Biltmore property to the United States Forest Service at $5 an acre as per the wish of Vanderbilt.