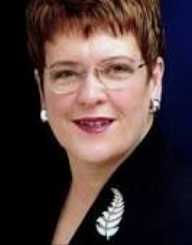 Jenny Shipley graduated from Marlborough Girls College in Blenheim before enrolling at the Christchurch College of Education (1971).

Prime Minister James Bolger resigned in December 1997, and Jenny Shipley was chosen to replace him, becoming New Zealand’s first female prime minister. At the time, the National Party was part of a coalition with Winston Peters’ New Zealand First party which broke up in August 1998. Shipley then allied with a New Zealand First offshoot, Mauri Pacific and was able to retain power. Her party lost the 1999 election, and Shipley became the Leader of the Opposition (1999-2001).

Jenny Shipley is a member of the Council of Women World Leaders, is active in business and is also involved in various charitable and community organisations.

Jenny Shipley married Burton Shipley in 1973, and they lived in Ashburton, South Island, Newland. They have two children: Anna and Ben. In 2009, age 48, Shipley suffered a severe heart attack due to a genetic disposition towards heart disease. She has since recovered.