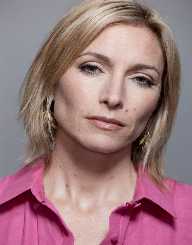 Claudia Karvan was born on May 19, 1972. She is an Australian actress and producer. She is popularly known for the role that she acts in the series ‘The Secret Life of Us.’ She is the producer of the series ‘Love My Way.’

Claudia Karvan was born on May 19, 1972, in Sydney in Australia. When she was eight years old her family excluding her father moved to Bali, but they returned to Australia after one year. She was brought up alongside brothers. Her family later moved to King’s Cross where her stepfather was situated. Her stepfather owed the nightspot Arthur’s. She attended SCEGGS Darlinghurst which was an Anglican School for girls. She developed an interest in acting while she was eleven years old.

In 1983, Claudia Karvan made her debut as a child actress in the film ‘Molly.’ In 1987, she starred in the movie ‘High Tide’ alongside Judy Davis. In the same year, she appeared in ‘Echoes of Paradise’ which was produced by Phillip Noyce. In 1990, she landed her debut lead role in the comedy film ‘The Big Steal.’ The film was a big hit, and it increased her popularity. In 1993, she starred in the film ‘The Heartbreak Kid’ alongside Alex Dimitriades. The film was based on a play with a similar name by Richard Barrett.

In 1999, Claudia Karvan starred the role of Alfhild de Luce in the drama film ‘Passion.’ In the same year, she appeared in the comedy movie ‘Paperback Hero’ alongside Hugh Jackman. In 2006, she starred in the film ‘Footy Legends’ and the American film ‘Aquamarine.’ She also starred in the thriller ‘Daybreakers’ alongside Willem Dafoe and Ethan Hawke. The movie was a commercial success and a critical success as well. It made her more popular to the general public. She has also starred in television series such as ‘Spirited,’ ‘The Secret of Us’ and ‘Love My Way.’

Claudia Karvan got married to Jeremy Sparks whom she met when she was twenty two years old. They have two children together. She is also a stepmother to a daughter from Sparks’ previous relationship.