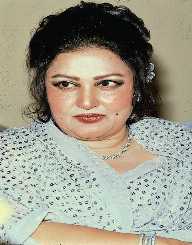 Noor Jehan born Allah Rakhi Wasai was a Pakistani actress and singer. Born on September 21, 1926, she worked in both British Indian and later in Pakistan. Known as one of the greatest and influential singers in South Asia, his career spanned over six decades. Jehan’s extraordinary talent earned her the honorific title, Malika-e-Tarannum (the queen of melody) in Pakistan. She was able to fit well in Hindustani classical music as well as other genres. Jehan spectacular career saw her record over 18,000 songs in both Indian and Pakistani languages including Punjabi, Sindhi, Persian, Pashto, and Urdu.

She holds a record of voicing the largest number film soundtracks in Pakistani cinema along with Ahmed Rushdi. Her career in acting and the film industry as a whole also saw her being regarded as the first Pakistani film director. She played role in films like Faryad, Khandan, which became the second highest grossing Indian film in 1942. Others include Naukar, 1943, Zeenat, 1945, Jugnu, 1947 and Mirza Ghalib among several others.

Allah Rakhi Wasai was born on September 21, 1926, in Kasur, Punjab, British India to Madad Ali and Fateh Bibi. Born into a Punjabi family, he was one of the eleven children of his parents. Her family was musically inclined on. Hence, his parents required her to follow that career path even though Wasai was more interested in acting. At age five, she had already shown her talent in traditional folk and famous theatre. Displaying such talent, he mother made her train under Ustad Bade Ghulam Ali Khan who gave her lessons in the tradition of the Patiala Gharana of Hindustani classical music. She also learned the classical forms of dhrupad, khayal, and thumri.

Wasai took her music lessons seriously, and at age nine, her talent caught the attention of Punjabi musician Ghulam Ahmed Chishti. Ghulam in return introduced her to the stage in Lahore and also wrote some na’ats, ghazals and folk songs for her to perform. All this time Wasai had the dream of going into acting or doing playback singing. After her studies, she took up a career in music along with her sister in Lahore and also did live song and dance performances before screenings of films in cinemas. In the 1930s, a theatre owner Diwan Sardaritook Wasai to Calcutta to develop her acting career. Her entire family followed later to that her sisters Eiden Bai and Haider Bandi would have the same opportunity. While there, the sisters were advised by Mtkhtar Begum to join film companies and even introduced them to some producers. Mukhtar also introduced them to her husband, Agha Hashar Kashmiri, owner of the maiden theatre. This was where Wasai had the stage name Baby Noor Jehan and her sisters also became the Punjab Mail after gaining a job offer from one of the Seth Sukh Karnani companies, Indira Movietone. The sisters acted in the Punjabi movie, Pind di Kuri directed by K, D Mehra in 1935.

Jehan sang the Punjabi song LanghajapatanchanaaN da O yaar in the film making it her first hit. The following year, she acted in Missar Ka Sitara in which she also sang a song composed by Damoda Sharma. In 1937, she acted in Heer-Sayyalplaying the child role of Heer. After spending some years in Calcutta, in 1938, Jehan returned to Lahore. While there, a popular music director, Ghulam Haider, composed her song in 1939, through which she became gained early fame. Jehan had a lead role opposite Pran in Khandaan in 1942. The film became very successful gaining her much fame.

After a successful career in India, Jehan Noor then with her husband Rizvi to move to Pakistan in 1947. The family then left their home in Bombay to settle in Karachi, Pakistan. Her first film in that country was in Chan Wey opposite Santosh Kumar in 1951. This was her first Punjabi film in which she played a heroine and playback singer. Secondly, she served as a director in the film along with Shaukat Hussain Rizvi, making her the first Pakistani film female director. In 1952, she played a role in Dopatta directed by Sibstain Fazli and produced by Aslam Lodhi. This film was a banger than even the first. Within 1954, she got divorced and married actor Ejaz Durrani in 1959, who forced her to give up on acting. In 1961, she played a role in the film Mirza Ghalib, and that film cemented her credentials as a talented actress.

Her next film was Qaidi in 1962, where she did a rendition of Faiz Ahmed Faiz’s Mujh se pehli si Mohabbat mere Mehboob na maang and recited a poetry in the form of a song with the music of Rasheed Attre. Her last film was in Baaji in 1963. Giving up on acting was to take charge of her growing family and the demands that comes out of it. In all she acted in four Punjabi films, ten in Urdu and 14 Pakistani films in her career that spanned for 33 years.

Noor Jehan quited acting but did not give up on the film industry entirely. In 1960, he made a debut as a playback singer in the film Salma. She had already made a playback singing in the Pakistani film Chann Wey in 1951. She made duets with the likes of Masood Rana, Mehdi Hassan, Nusrat Fateh Ali Khan, Ahmed Rushdi and Mujeeb Aalam. Jahan sang for actresses Reema and Neeli during their debut in the 1990s. She became an iconic singer especially with her patriotic song during the India and Pakistan war in 1965. She represented Pakistan during the World Song Festival in Tokyo in 1971.

In 1942, Noor Jehan got married to Shaukat Hussain Rizvi. The couple had three children including singer, Zil-e-Huma. They divorced in 1953. In, 1959, she married Ejaz Durrani and had three children from that marriage. This also ended in divorce in 1970. During a tour in North America in 1986, she complained of chest pains and was later diagnosed with angina pectoris. She underwent a bypass surgery after the diagnosis. She suffered a heart attack in 2000 and was rushed to the Karachi hospital. She died on December 23 same year of heart failure. Jehan was interred at the Gizri Graveyard near the Saudi Consulate in Karachi.