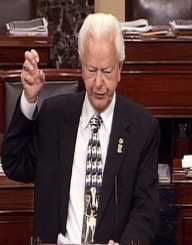 Robert Byrd was a US senator from Virginia that served from 1959 to 2010, becoming the longest-serving senator in the US and the longest-serving member of the United States Congress. However, the record was later suppressed by John Dingell after Byrd’s death.

In 1964, Robert Byrd held a strong anti-black stance when he filibustered the Civil rights act for about 14 hours. However, Byrd later came public and apologized for his action. In spite of a few controversies, Byrd always remained a popular and respected leader who ever worked for the improvement of the state. Also, Robert Byrd was also involved in international issues, i.e., the Iraq war.

Robert Carlyle `Bob’ Byrd was born on 20th November 1917, in North Wilkesboro, North Carolina. His birth name was Cornelius Calvin Sale Jr. His parents were Cornelius Calvin sale Sr. and Addie Mae Kirby. His mother Addie Mae died in 1927 when Byrd was only ten years old. His father then put him under the guardianship of his relatives named Vlurma Byrd and Titus, who later changed his name to Robert Cayle Bryd.

Robert Byrd was brought up in the coal mining region for most of his childhood, in southern West Virginia. Byrd went to school at Mark Twain High school located in Tams. Byrd joined Beckley College and later transferred to Concord University. However, Robert Byrd was not able to complete his education there. In 1940, he joined the Ku Klux Klan.

Robert Byrd helped recruit about 150 young men to the group, in a bid to begin a new chapter. As a result, the Klan official saw excellent leadership potential in him and encouraged him. By the time, Byrd had never planned for a political career. However, Robert Byrd gained a lot of encouragement and began developing political aspirations.

From the time Robert Byrd developed the political aspirations, Bryd had to wait for about six years to join the political arena. Meanwhile, Byrd sought employment in various areas to support himself financially.Byrd began working as a gas station attendant and later worked as a butcher, clerk at a grocery store, and a wielder. At the time, his interest in the Ku Klux Klan diminished, and he soon distanced himself from it. However, Byrd maintained his position as a Segregationist.

Robert Byrd contested for in the West Virginia House of Delegates and emerged a winner. This marked the start of Byrd's political career, and he served in the position from 1957 to 1950, representing the Raleigh County. He was then voted into the upper house of the West Virginia legislature and worked there until 1952. Byrd then decides to further his political aspirations and joined the Democratic party. During the 1952 elections, he contested for a seat in the United States House of Representatives and won. He served in the house from 1953 to 1959.

The position of the President Tempore of the Senate is the second highest position in the Senate after the Vice president since the president Tempore takes over in the absence of the later.  Robert Byrd also served as the President Pro tempore emeritus of the legislature from 2003 to 2007.During his long career, Bryd also worked as the Chairperson of the Senate appropriations committee. He served from 1989-1995, January 2001, June 2001- 2003 and 2007 to 2009.

During his reign as a senator,  Robert Byrd steered a lot of federal money towards development of West Virginia. This led to the development of many national projects that boosted the initially poor county-Byrd successfully advocated for public broadcasting of the Senate’s proceedings to familiarize the public with the Senate’s activities.

Robert Byrd accredited to development of a lot of infrastructure and facilities, i.e., dams, highways and educational institutes.

Robert Byrd was awarded the Henry Adams prize as a result of his efforts in research of the history of the federal government. He was the recipient of the Friend of history award by` Organization of American historians.’

He was the recipient of the `Theodore Roosevelt-Woodrow Wilson’ award in 2004 due to his Civil service,

Robert Byrd got married on 29th May 1937 to Ema Ora James. They had two children named Marjorie Bryd and Mona. His wife Ema Ora died in 2006. The family later extended to six grandchildren and seven great-grandchildren.

As he aged, Robert Byrd suffered from the Essential tremor. This referred to a disorder that affects movement and was forced to use a wheelchair. However, he remained politically active and still attended political functions.

Robert Byrd died on 28th June 2010 at Fairfax hospital in Fairfax, Virginia. His death was as a result of natural causes.

Even after his death, Byrd's  name lives on through many highways and institutions which have been named after him, for example `Robert C Byrd Centre for hospitality and tourism’ and `Robert C Byrd Highway.’