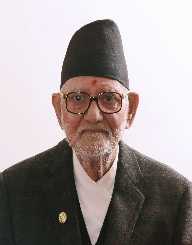 Sushil Koirala was a Nepalese former prime minister and politician born in 1939. He was prime minister from February 1, 2014, to October 10, 2015. He was also a member of Nepali Congress party and served as its president from 2010 to the time of his death in 2016. Koirala was politically active from 1954 when he was still young.

He was exiled in 1960 and stayed in India for 16 years. He edited Tarun a publication that belonged to his party while in exile. His participation in the hijacking of a plane while in India led to his three years imprisonment.

Sushil Koirala was born on August 12th, 1939. His place of birth was in a big city namely Biratnagar in Nepal. He was the son of Bodh Prasad Koirala and Kuminidi Koirala. He had eight siblings. He was also a cousin to Bishweshwar Prasad, Matrika Prasad, and Girija Prasad. They all were once prime ministers in Nepal. He is believed to have studied I.Com in a college in India though he had an informal education.

Sushil Koirala joined politics at such a young age. He developed much interest in the principles of Nepali Congress party, especially on democracy. He became a member in 1954 when he was just a teenager. His cousins were also among those at the top positions in the party then. His cousin Bishweshwar Prasad became prime minister after the democratic elections held in 1959. Bishweshwar was expelled in 1960 by King Mahendra. This was followed by the exile of most members of Nepali Congress party. Unfortunately, Koirala was among them.

He remained in exile for 16 years upon which he was actively involved in a resistance movement that opposed the ruling of King Mahendra. He spent his time editing Tarun, a publication for his party. He played a role in the hijacking of a plane in 1973. This was an aeroplane from Nepal heading to India. This led to his three years imprisonment in India.

Sushil Koirala returned to Nepal in 1979 after serving his exile period. He put most of his effort advocating for democracy in his country. Eventually, in 1990 an agreement was made with the monarchy that was in power at the time. Legislative elections then took place a year later in 1991.

He became General Secretary of Nepali Congress in 1996 and was appointed vice president two years later. He took over from his cousin Girija Prasad Koirala as president of the party in 2010 after his death. He held the position till the moment he took his last breath.

Sushil Koirala won in the elections against the former Prime Minister Sher Bahadur Deuba on February 10th, 2014. He then became the prime minister of Nepali. However, there were many criticisms about his government during his reign. He came into power at a time when natural disasters took place. Many people had died and other stranded in a snow storm around October 2014. This occurred in the region of Annapurna. The government with Koirala as prime minister did nothing to help the situation. This made the citizens quite disappointed.

The situation went from bad to worse when in April 2015 a terrible earthquake hit Nepal. The government had to seek international intervention to help out with the situation. Following the misfortunes, a new party came into power in September 2015. This was the Communist Party of Nepal with Khadga Prasad as the prime minister. This marked the end of Koirala’s position as a prime minister.

Not much is known of Koirala’s personal life except that he is never married. Sushil Koirala was a simple man who had eyes for politics only but not women. He was addicted to smoking which led to tongue cancer in 2006 and later lung cancer as well.

Sushil Koirala had his last breath on February 9th, 2016 when he was 76 years old. He died in Kathmandu, Nepal of pneumonia.