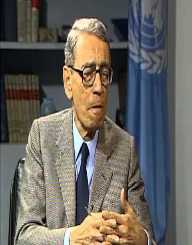 Boutros Boutros-Ghali was born to Yusuf Butros Ghali and Safela Maikhail Sharubim on November 14, 1922, in Cairo. The family was of the Coptic Christian faith. His paternal grandfather Boutros Ghali was a former Prime Minister of Egypt from 1908 until his assassination in 1910. In 1946, Boutros Boutros-Ghali graduated from the Cairo University and continued with his Ph.D. in international law in University of Paris. He later acquired a diploma in international relations from the Sciences Po in 1949.

In 1949, Boutros Boutros-Ghali was appointed to the Cairo University as Professor of International Law and International Relations, where he served until 1979. In 1975, he became the President of the Centre for Political and Strategic Studies. In 1980, he was appointed the President of the African Society of Political Studies. From 1954 to 1955, he was a Fulbright Research Scholar at the Columbia University.

He also served as the Director of the Centre for Research of the Hague Academy of International Law from 1963 to 1964. From 1967 to 1968, he was a Visiting Professor at the Faculty of Law at Paris University. He was also appointed an Honorary Rector of the Graduate Institute of Peace Studies, a branch of Kyunghee University Seoul.

Boutros Boutros-Ghali gained interest in politics during the presidency of Anwar El Sadat in the 1970s. From 1974 to 1977, Boutros Boutros-Ghali served as a member of the Central Committee of the Arab Socialist Union. Afterward, he was appointed as the Minister of State for Foreign Affairs of Egypt holding office from 1977 to 1991.

In this capacity, he played a role in the peace agreements between President Sadat and Israeli Prime Minister, Menachem Begin. There were also allegations according to works of an investigative journalist, Linda Malvern that, he secretly agreed a $26 million arms deal with the Rwandan government in 1990. The Hutus subsequently used these weapons during the Rwandan Genocide. Boutros Boutros-Ghali later served as the Deputy Minister for Foreign Affairs for some months before getting an office at the United Nations.

Boutros Boutros-Ghali was elected the Secretary General of the United Nations in 1991. His term of office came with several controversies. In 1992, Boutros Boutros-Ghali submitted An Agenda for Peace, which was his suggestion in how the UN could respond to violent conflict. In 1994, he came under intense criticism when the UN was unable to act swiftly to the Rwandan Genocide that saw over a million people dead, this act of so-called incompetence happened again when he was unable to gather the support of the United Nations in the Angolan Civil War. He was also met with another huge task during the Yugoslav Wars after the separation of the former Yugoslavia. These and others including the ineffectiveness of the UN and the role of the United States affected his reputation.

Boutros Boutros-Ghali was also blamed by some Somalis for escalating the Somali crises through his personal crusade against Mohamed Farrah Aidid and the HabrGidr clan and supporting the rival Darod clan and former dictator Mohamed SiadBarre. After his first term of office ended, ten Security Council members led by Botswana, Egypt and Guinea Bissau, sponsored a resolution for another five-year term for Boutros-Ghali. This was however vetoed by the United States and four other countries including the United Kingdom, Italy and South Korea did not sponsor the resolution. These countries later voted in support of Boutros-Ghali going for a second term. Boutros-Ghali became the only UN Secretary-General to serve just a term in office. The Ghanaian, Kofi Annan, succeeded him in 1997.

Boutros Boutros-Ghali was married to Leia Maria Boutros-Ghali, nee Leia Nadler. He died on February 16, 2016, at age 93 in Cairo after being admitted for a broken pelvis. He was buried at Petrine Church in Abbassia, Cairo.

Boutros Boutros-Ghali was awarded an honorary doctorate from the Faculty of Law at Uppsala University, Sweden.