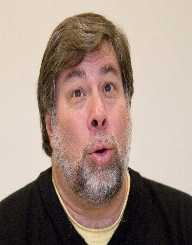 Steve Wozniak was born on August 11th, in 1950. It is through his contribution to the invention of Apple I & II that the evolution of microcomputers was witnessed significantly. The invention of Apple technologies was with the help of Steve Jobs. The two paired together to come up with some of the first PC-Personal Computers in the market in 1976.

Steve Wozniak was born on August 11th, 1950. His place of birth was in San Jose, California. His father was called Jacob Francis whereas his mother went by the name Margaret Elaine. Right from the time he was young, Wozniak felt that he was destined to be an expert in electronics.

During the early stages of his life, he experimented with the making of several homemade devices including ham radio, games, calculator and a voltmeter. The young and talented Wozniak thought school to be somehow dull and tiresome. As a result, he was dismissed from the University of Colorado. Fortunately, he got admitted into the University of California.

While studying at the California University situated in Berkeley, Steve Wozniak crossed paths with Steve Jobs. At this time, Jobs was still in high school, and the two were brought together via a mutual friend. The duo felt a strong connection together as they shared similar interests more so in the field of electronics. They became friends, and with time they started working together at Hewlett-Packard. Wozniak dropped out of school again without completing his studies. The two individuals invented the new Apple Computer on April 1st, 1976. This motivated Wozniak to quit working with HP.

Around this period, the market was experiencing an increasing demand for personal computers. Steve Wozniak and Jobs began working tirelessly in their family garage in trying to come up with a user-friendly product as compared to what was in the market. The rival that they were competing with was IBM-International Business Machines. Wozniak and Jobs had different duties to play in their business. Jobs dealt with the marketing of the products while Wozniak did most of the invention.

Shortly after the invention of the Apple computer, next Steve Wozniak came up with Apple I. The pair worked together in raising their brand in the market out there. Soon, Apple II was also out on the streets and business was increasing. During the early 1980s, their company, Apple traded at $985 regarding stocks. In 1985, Wozniak sold a large number of his shares with the intention of leaving the company. He argued that the company was not heading in the direction that he initially thought. Steve Wozniak left the company the same year in 1985.

Steve Wozniak was involved in an airplane accident in February 1981. He was piloting the Beechcraft Bonanza, and it crashed immediately after taking off. He suffered brutal injuries both to his head and his face. For the next five weeks after the incident, he suffered from anterograde amnesia. This meant that he had no memory relating to the crash and that he did not know what his name was during this period. Sources claim that Apple II computer games had a positive effect in helping him recover his memory.

Wozniak has been married twice. He was in a marriage relationship with Candice Clark, and they had three children together. His second marriage was to Janet Hill, who is his current wife. At some point, there was a rumor going around that he was in a relationship with Kathy Griffin. This was before getting married to Hill.