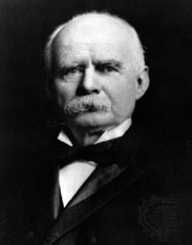 Born on October 23, 1835, Adlai Stevenson I was an American politician and public servant. He was 23rd Vice President of the United States from 1893 to 1897 after serving as a congressman for Illinois between 1870 and 1980. Before getting into politic, Adlai Stevenson I was a public servant and his immediate position was as an Assistant Postmaster General of the US. His appointment came under the political administration, Glover Cleveland. His appointment to the position came with several controversies and criticism as he blatantly exhibited his political affiliation to the Democratic party.

Adlai Stevenson, I started practicing law at age 23 when he was called to the Bar in 1853. Adlai Stevenson, I practiced at Metamora, Woodford County, Illinois where Adlai Stevenson I met the renowned lawyers like Stephen A. Douglas and Abraham Lincoln. Being to Adlai Stevenson I, he decided to campaign for him against Lincoln in the 1958 Senate race. During the civil war, he had his first public servant position as an aide in the court of equity. He later became a district attorney in 1864 a position he held for four years. After his service as a district attorney, he went back into practicing law with his cousin James S. Ewing. The two later formed the law Stevenson &Ewing.

In 1974, Adlai Stevenson I was nominated by the Democratic Party to contest for the United States Congress on the party’s ticket. His fierce rival and the incumbent at the time was Republican’s John McNulta. Adlai Stevenson I got massive support and nomination of the Independent Reform Party. Both candidates engaged in accusations and counter accusations but Adlai Stevenson I was able to win the election with 52% of the total valid votes counts.he made it as a congressman to the 44th United States Congress. He couldn’t, however, win the contest in 1876 to serve a continuous second term. Adlai Stevenson I came back strongly in 1978, and on the ticket of the Democratic and the Greenback, to get back to the House and that was his last ever term as a congressman.

Adlai Stevenson I gained prominence and notoriety alike. Adlai Stevenson I always had grudges with persons who did not support his political ambitions. After his termed had ended, Adlai Stevenson I was made the director of the Peoples Bank and also co-managed the McLean County Coal Company. An extension of the company Stephenville was later founded and was managed by him.

Back To Public Office

When Grover Cleveland was seeking the nomination of the Democrats to contest for the presidency, he got the support of Stephenson. Adlai Stevenson, I was then a delegate to the 1884 Democratic National Convention and therefore threw his support to Cleveland. After Cleveland won the election, Adlai Stevenson I appointed Stephenson as the Assistant postmaster general. Being political vindictive, he relieved all political opponents of their off their post and filled in with Democrats. This didn’t go down well with Republicans who were at the time in control of the Senate, and they would revenge later. During the last days of President Cleveland in office, he appointed  Adlai Stevenson I to the Supreme Court of the District of Columbia. But this is when the Republicans will pay Stephenson with his own coins. His nomination was not approved, and upon the expiration of Cleveland term, he left back to Bloomington.

Grover Cleveland was again elected to run for president at the 1892 Democratic National Convention held in Chicago. After an intense lobby, Adlai Stevenson I was settled on to run with Cleveland. He campaigned vigorously, and at the end of the national elections, Cleveland won, and he became the vice president. As a vice president, he presided over the U.S Senate. Adlai Stevenson, I adjudicated on issues without any political lines making him gain goodwill among senators. Stephenson’s dream to be the successor of Cleveland failed when he contested in 1896. Their term of office ended in 1896. Though he had a failed presidential ambition, Adlai Stevenson I supported the candidature of Willian Jennings Bryan.

Adlai Stevenson, I was once again chosen by the Democrats as a vice to William Bryan in 1900. This was after a pro-republican activist Charles A. Towne who was Bryan’s favorite had agreed to step aside. Adlai Stevenson, I partnered Bryan, but the two lost the general election to the Republican’s McKinley and Roosevelt. This made him the first persons to contest as vice president with two different presidential candidates.

Adlai Stevenson I married Letitia Green in 1866 and had four children, three girls, and a boy. He died in 1914 at age 79 in Chicago. He was awarded an honorary degree by his alma mater, Centre College in 1893. A new residential hall was later named after him in 1962.