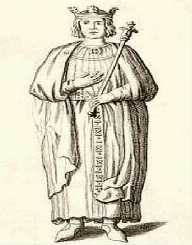 A Tale of Peter the Cruel and the Just: Peter Of Castile

Peter of Castile was born on August 30, 1334, in the defensive tower of the Monasterio de Santa Maria la Real de Las Huelgas in Burgos, Castile, Spain. He was the son and successor of Alfonso XI, Spanish King of Castile and León and Galicia. His mother was Maria of Portugal, daughter of Alfonso IV of Portugal. Peter grew up receiving a good education and became a well-read person with interest in music, poetry, and entertainment. Blessed with a tall and muscular frame, he used to sweat it out working for long, grueling hours. He was highly attracted to the opposite gender and was a favorite among womenfolk with his pale complexion, blue eyes, and very light blonde hair.

Peter of Castile succeeded his father as the King of Castile after the death of Alfonso XI in 1350. He was still a few months short of attending sixteen years of age when he accessed the throne. He, being a minor and inexperienced, his mother started controlling him and the affairs of the kingdom stringently with the help of some of her favorite members of the court. Peter wanted to liberate himself from the clutches of his mother and sought some assistance and soon found one of his ministers named Albuquerque helping him in this regard.

In 1352, John II of France successfully forced Castile into a military alliance against England and Peter was forced to marry Blanche, daughter of Pierre, Duc de Bourbon against his wishes. At that time, he was passionately in love with María de Padilla, and it was rumored that he had already tied the knot with her before his forced marriage with Blanche. The Franco-Castilian alliance ended soon afterward as Peter deserted Blanche instantly after the wedding.

At home, Peter of Castile was always threatened by several of his illegitimate half-brothers led by Henry of Trastámara (later known as Henry II). Peter faced several rounds of revolts from these people but was able to crush them, each time they resurfaced successfully. After failing to garner any widespread support and sympathy for him, Henry finally fled to France in 1356 and offered his support to the French Crown against Peter.

Peter of Castile fled to Bayonne; a city under the English ruled Gascony and sought the help of the English forces under the Anglo-Castilian alliance of June 22, 1362. The English troops under the leadership of the Black Prince Edward entered into the battle of Nájera, where The Trastámaras and their French allies were defeated restoring the reign of Peter. Henry again came back to Castile in September 1368, this time with new reinforcement of more French troops, given to him by Charles V. The ensuing battle continued for a while. On March 14, 1369, both the forces of Peter and Henry became engaged in a decisive battle in Montiel, a fortress controlled by order of Santiago. Henry with the help of Bertrand du Guesclin cornered Peter.

Peter of Castile took shelter in the fortress and opened a channel of communication with Henry for some negotiations. He tried to bribe Guesclin, who was then acting as the envoy of Henry. Guesclin informed Henry about the lucrative terms of the offer and bargained with Henry for a more fabulous package to betray Peter. Finally, both Henry and Guesclin struck a deal. In the intervening night of March 23, 1369, Guesclin successfully persuaded Peter to come to his tent on the pretext of an acceptable negotiation with Henry. Henry also arrived in the tent and assassinated Peter.

Peter of Castile started his reign when he was about sixteen years old. Initially, he was supposed to marry Joan, daughter of Edward III of England. However, during the journey Joan undertook to reach Castile, she passed through several cities which were infested by Black Deaths. She ignored all prior warnings about not traveling through those regions. Eventually, Joan contracted the disease and died. Peter was romantically involved with María de Padilla and married her secretly in 1353. His mother forced him to marry Blanche of Bourbon in the same year, but he abandoned her immediately after the marriage.

Peter was nicknamed Peter the Cruel by his contemporary historians due to his spree of cruel executions during the decade-long ‘War of the Two Peters.’ However, the later historians differed in their opinion about him and viewed him as a fierce enforcer of justice and renamed him as ‘Peter the Lawful.’