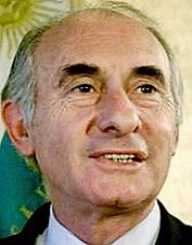 An indigenous soul of Cordoba, Fernando de la Rua hailed as a one-time President of Argentina. He ruled the Argentinians for one term. But what he did during his short tenure is nothing else than bringing good hope to his beloved country. Out of patience, Fernando restored back Argentina’s solvency as well as decreasing unemployment. Not to mention corruption was something that was out of his dictionary. He acted as the 47th head of state. His out of world dialogues and debates gave him a chance to chair as a senator, attorney and acting mayor of Buenos Aires. Competition from his colleagues including Carlos Menem didn’t hinder him from following his path. However, the return of Legislative body’s disruptions and scandals forced him to resign. Read further to know more about his early and later achievements.

Fernando de la Ru is still known as a deep thinker who defines planning at its best. He is excellent when it comes to debate and dialogues. In the case of a rising argument, he doesn't seem to take either side. But he perfectly knows how to defend himself. He prefers to view life as a developing phase that allows him to make several changes. Not to mention, Fernando seems to be quite selective when it comes to choosing his friends. He strongly believes in political agitators who appear to control his life. In all, his close friends give him a chance to overcome an awkward situation. Read on.

On 15th, September 1937 a couple, Antonia de la Rua and Eleonora Bruno were blessed with a son in Argentina, Cordoba. He first started to gain his love for books when he joined the Military Lyceum. He was then taken to the National University of Cordoba where he majored in law. It was at the age of 21 that he graduated from the said Varsity. Afterward, he opted to join the political world through the Radical Civic Union.

It was after his graduation that he furthered his studies from the National University of Cordoba. While there he received his Ph.D. At 26 years of age, he traveled to Buenos Aires where he served as an advisor to Minister, Juan Palmero.

During the 1973s general elections, Fernando de la Ru was appointed as the leading Senator where he succeeded Marcelo Sanchez Sorondo. However, he remained in the position for three years after an uprising. This led to new governmental laws, and Fernando went to serve as the lawyer in Buenos Aires.

With a determined heart, he reprised into political field in 1983 where he aimed for the presidential seat. Sad to say, his dreams were cut short when he was defeated in the primaries. But he was lucky to be appointed as the senator once more.

In 1991 Fernando de la Ru saw himself as the deputy and later as the senator. After the end of his term, he was appointed as the Mayor of Buenos Aires. It was during his tenure that he brought forth the remarkable transformation. For instance, he established a tube network that led to the expansion of Saavedra town.

Before welcoming the new millennium, de la Rua was appointed as the acting President of Argentina under the Radical Civic Union. His tenure saw him solving different problems including the economic crisis.

However, his leadership was tested when the financial aid organizations from the US declined to support Argentina. It was here that he increased a lump-sum amount of tax to affluence stakeholders. Hell broke loose in 2001 when the public started to go against his wish. He tried his best to improve the Argentinians economy without success. This is what led him to resign on December 21, 2001.